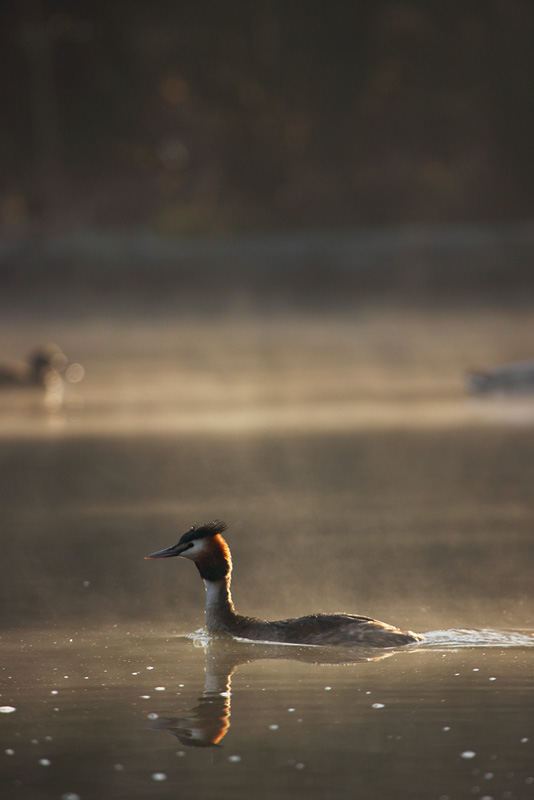 One of those rare moments when everything just comes together. I was photographing the ducks in the middle distance when I noticed the Grebe to my right about to enter the shot. I quickly refocused and hoped for the best. It was just good fortune that he moved into the pool of light in the foreground.

I’ve just had a morning of photography that you normally only ever dream about. We’d been for a walk at the nearby canal the weekend before and spotted a couple of Great Crested Grebes. I’d been wanting to photograph these for a while and so resolved at the next available opportunity to go and photograph them.

Things began to look very promising on the Friday night. The rain gave way to a beautiful sunset, and as I walked past a local lake on the way home I noticed all the mist rising up off it. I began to feel a little excited. I set the alarm for 6 o’clock and after a quick breakfast I was soon down by the canal. Conditions were absolutely perfect. The morning sun was filtering through the trees and a thick mist was rising up off the water, just a beautiful morning. A Grebe appeared very shortly thereafter through the mist and I managed to get the shot below. 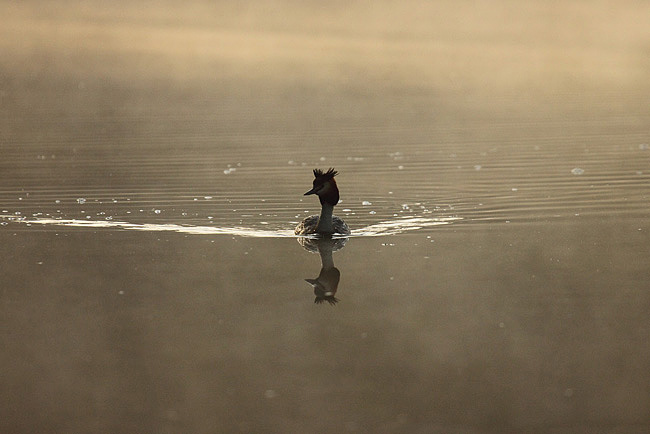 I think he knew he looked good

I followed this one for a little while before I lost him as he dived down, so went searching further along to see what I could find. It wasn’t long before I came across the female waiting patiently for her beau. When he returned they started heading straight towards me to a part of the canal that narrows and to my utter delight started a courtship ritual. The ritual is quite a bizarre thing, much shaking of the head and strange noises. I couldn’t believe my luck, I’d hoped I might be able to capture this event but hadn’t really thought I would see it, let alone see it played out five yards in front me. I fumbled frantically as I attempted to frame the shot and focus properly (tricky with the light), but thank heaven I managed to get a few good ones. 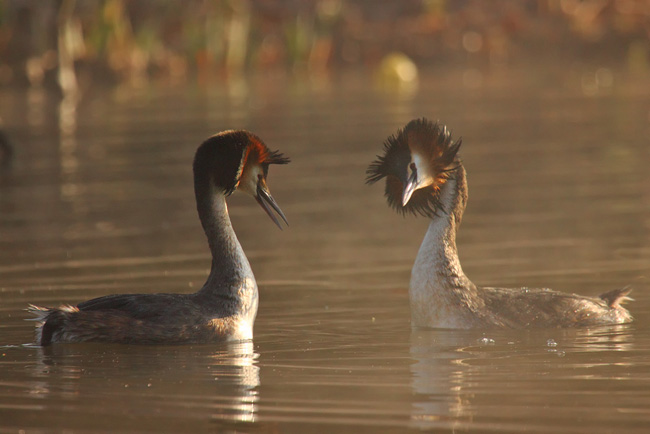 Well I was impressed with his head shaking display, even if she wasn't 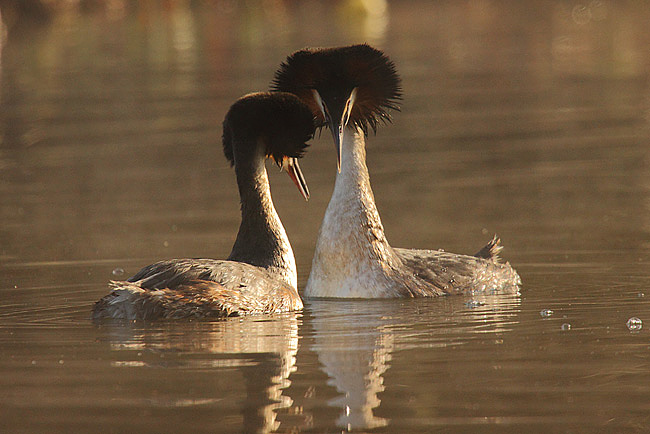 I’d have been quite satisfied with my lot after this, but whilst crouched down at the bank a nuthatch appeared right next to me to collect mud for his nest. Again I frantically turned the camera around on its tripod and attempted to focus, all the while expecting to scare it off. But he was obviously for too preoccupied with his nest building to much mind me and gave me enough time to fire a few frames off. 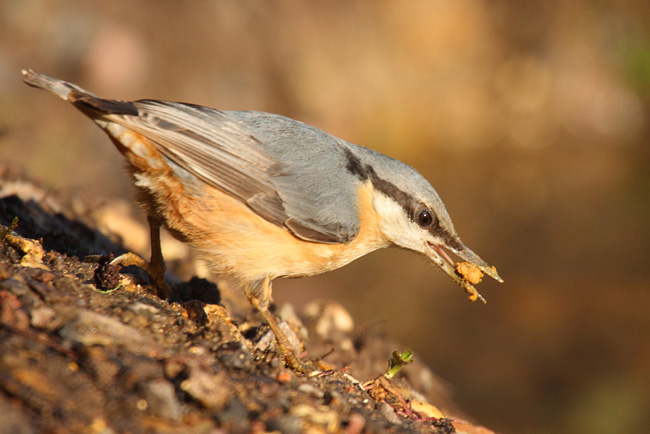 Nuthatch collecting mud for his nest

I’d attempted to photograph these birds unsuccessfully up at Newlands Corner, but this guy was far more accommodating. What’s more, I know where his nest is now so I’ll be back for more! 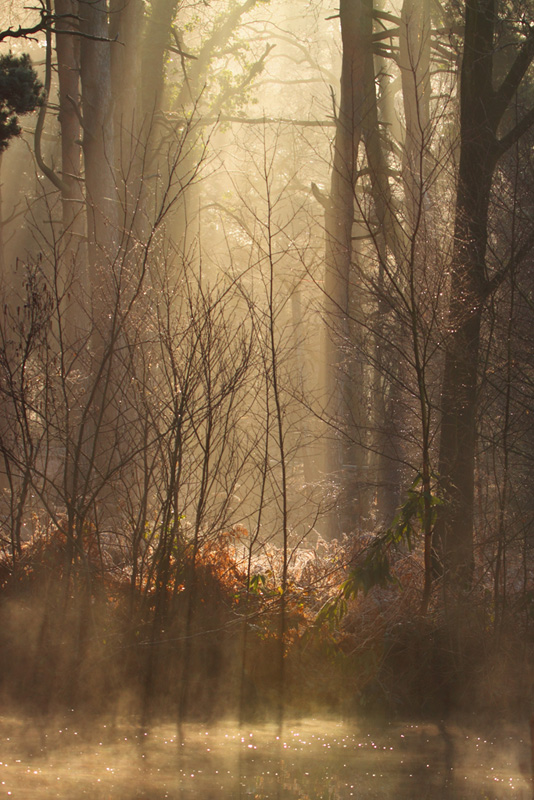 Sunlight through the trees. I've lived near here for over 10 years and walked this stretch many times, but never have I seen it look this beautiful.

Just when I thought things couldn’t get any better I heard the sound of waxwings up in the tree above me. Ever since hearing about their invasion on Autumnwatch with Chris Packham waxing lyrical about them I’d wanted to capture these beautiful birds. My brother had seen them a number of times outside his house, but I was never able to get over there. Then one Sunday a whole flock appeared at the end of my garden, but the weather was pants and they were too far off for any decent shots. The weather today was perfect but they were very high up and I was having trouble keeping steady enough. I tried tripod mounting and contorting my back as I pointed the lens up to the skies and managed to get one or two passable shots. 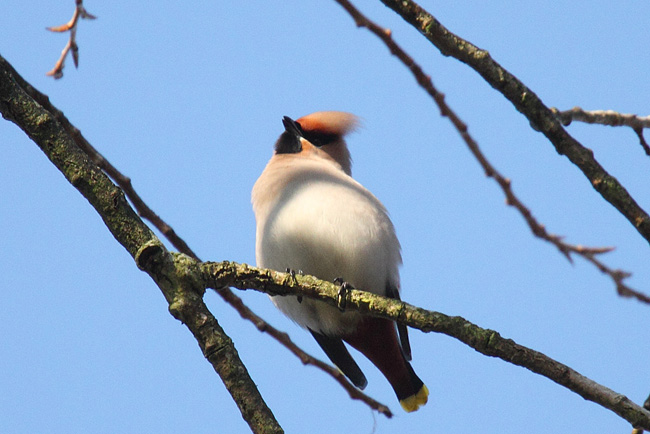 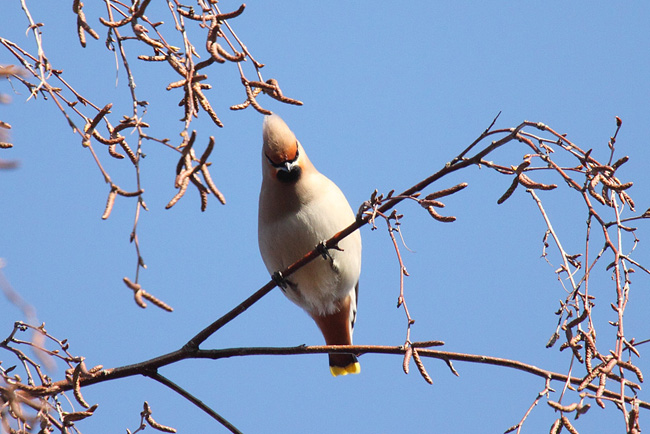 You looking at me?

Finding a decent angle where there wasn’t half a tree in the way was difficult, but after the morning I’d had I wasn’t about to complain.

The one thing this all demonstrated to me is there’s often little need to travel miles in search of opportunities, sometimes you don’t need to look much further than your own doorstep. The beauty is that I can return again and again and hopefully get many more shots of the Great Crested Grebe. Heck, the chicks will be along soon! 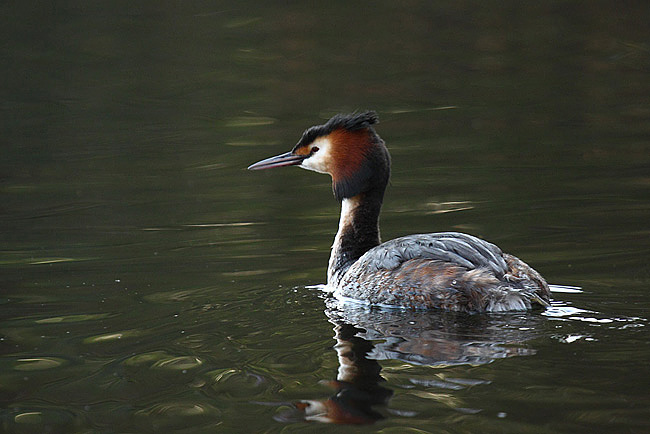 A Grebe in pensive mood. I think maybe he'd left some cheese on top of the fridge and has just remembered.