Posted by giantsquid on December 8, 2012 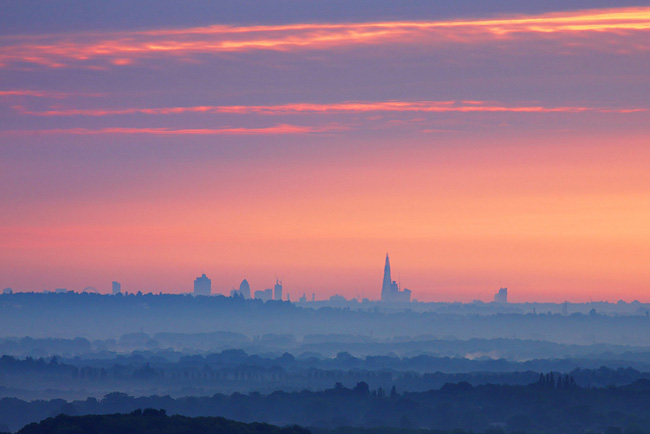 London Skyline from the Hogs Back, Guildford. The Shard was on my hit list for this year but I hadn’t imagined a shot quite like this. I had no idea London was even visible from here, until I pulled out the long lens to focus on a line of buildings in the distance!

If 2011 was a great year then 2012 has been out of this world! The highlight was of course receiving the Runner-Up Award in the Landscape Photographer of the Year Classic View, a long held dream that finally came true. My main aim was just to get in the book, so to receive a runner-up, and then Judges Choice from Charlie Waite, was just incredible. The awards evening was very special, and I got to shake hands with Charlie. A couple of weeks later Joe Cornish visited my neck of the woods to do a talk, so in the space of a month I saw two ‘Galactico’s’ of photography! It’s fair to say Joe has been a huge influence on me over the years so it was great to finally see him. 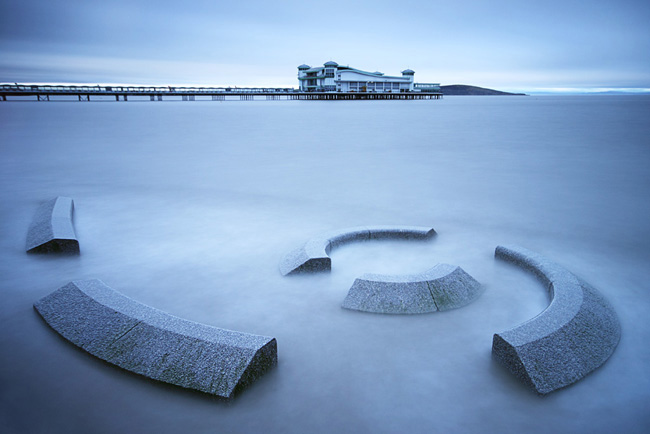 This was my other shortlisted entry in the Landscape Photographer of the Year. Didn’t make it all the way, but I wasn’t complaining.

I was also shortlisted in the British Wildlife Photographer of the Year Awards with a couple of images, but sadly neither made the final cut. It would’ve been fantastic to have got into both books, but not to be. I’ll keep trying though! 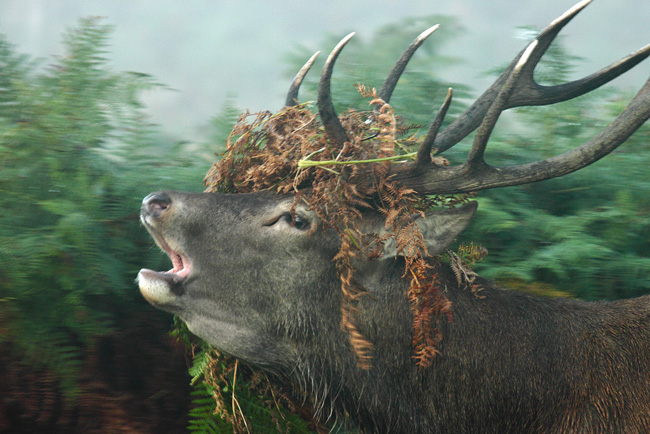 I was quite surprised this was shortlisted over a couple of my other Stag shots that I personally felt were better, there’s just no accounting for judges’ taste! 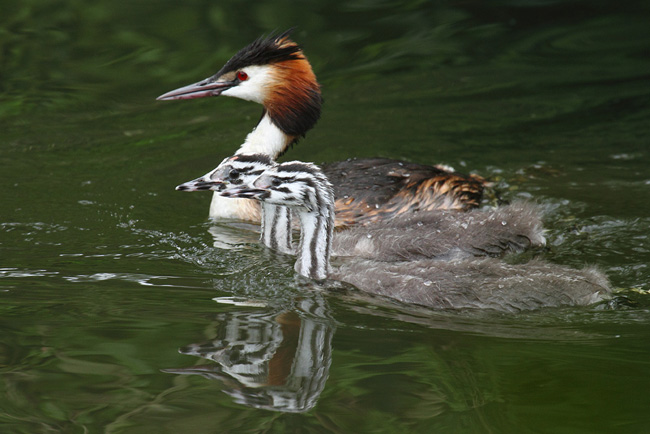 My other shortlisted entry in the British Wildlife Photography Awards. Note to self – more cute pictures in future.

Just to round the year out one of my images appeared on BBC’s The One Show, on the 13th December. Matt Baker and Alex Jones had John Craven in the studio and so asked for viewers to send in images for John to judge. Not one to miss an opportunity I sent a couple in and to my astonishment they displayed my ‘Stag Breath’ shot! 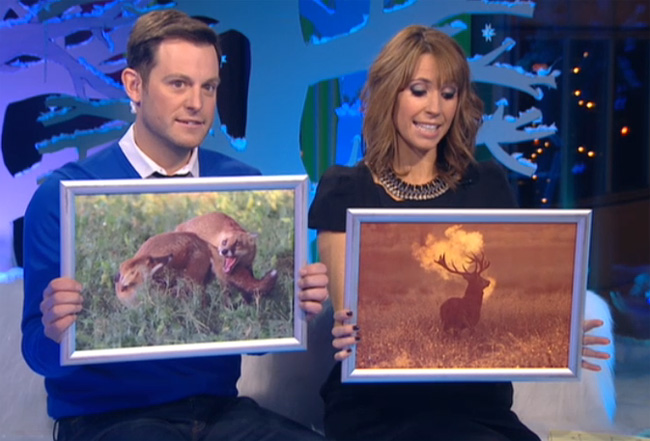 Then as a final send off for the year Hampshire County Magazine used one of my shots from Longstock on the cover of their magazine, January 2013 edition. In mid December. Never quite understood that. 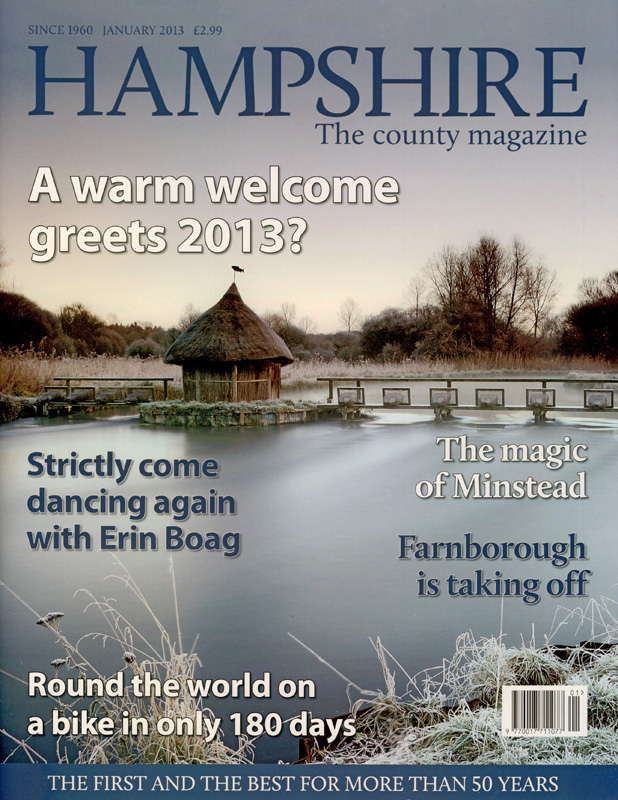 Looking back at some of the goals I’d set myself at the end of last year, I have managed to get through quite a few of them. I finally managed to get a couple of decent shots of the Long Tailed Tits in the garden, and an extra bonus was the arrival of the Redwings for a couple of days. They’d been visitors at our old house for a couple of winters but I hadn’t managed to get any decent shots, so it was great to finally get some. The Blackcap still eludes me though! Further afield, I made a few trips down to Papercourt Meadows to shoot the Short Eared Owls, and although I got one semi decent shot, I don’t really feel I’ve done them justice yet. I was hoping to get down to Papercourt again this winter, but so far it appears they haven’t visited, but you never know. 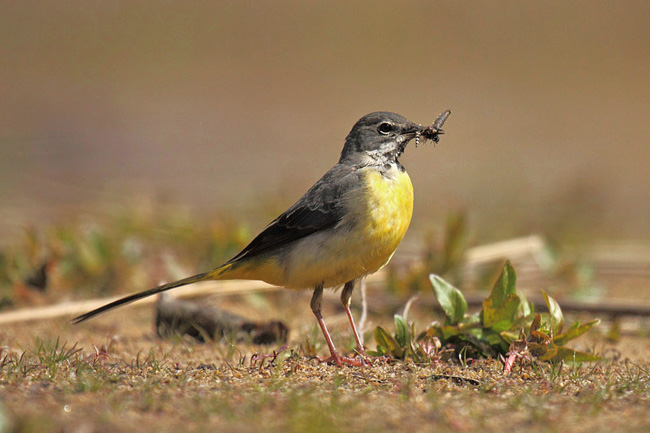 Grey Wagtail with Mayfly, Frensham Little Pond, Surrey. This was a finalist in the White Lion Walk Photo Competition, but lost out to a shot of poppies.

I also managed to get some decent shots of a few species on my wanted list, namely Lapwings, Little Grebes, Swallows and Grey Wagtail. I entered the Grey Wagtail shot in the local White Lion Walk photography competition, where it made it to the final, but no cigar on this occasion! This year I discovered the delights of Wisley Gardens, and whilst there was lucky enough to photograph a family of Little Grebes with their 4 chicks very late in the season. Having barely a sighting of a Little Grebe last year, this year they appeared to be just about everywhere I went! Wisley is also great for seeing Goldcrest, another that I hope to tick off the list in 2013. 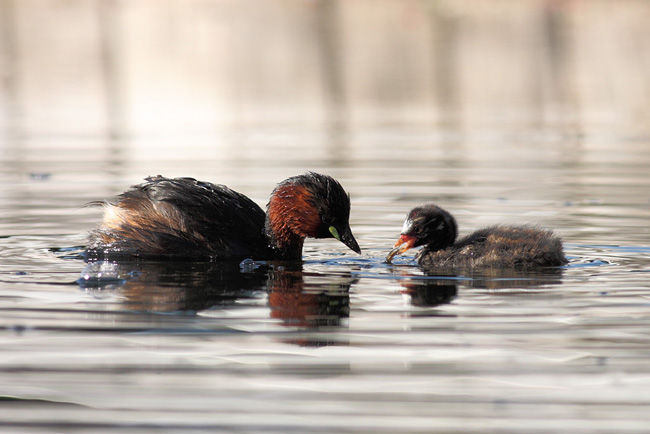 Last year I spent a lot of time photographing the Great Crested Grebes. This year I decided to concentrate on heathland birds. Surrey is famed for it’s precious heathland habitat, and in my quest to highlight local wildlife it seemed the natural choice. The Dartford Warbler was high on my wanted list, but in the three or four visits I made to Thursley Common it eluded me. Photographing heathland birds was a lot harder than I’d anticipated. Getting close enough was perhaps the biggest problem. I spent 3 or 4 hours attempting to photograph Stonechats, but just couldn’t get close enough. I did manage to photograph a number of new (for me) species, namely Whitethroat, Linnet, Reed Bunting and Whinchat. However, the highlight for me was seeing and photographing Redstart, really quite stunning birds, another high on my wanted list, and a bird that until this year I didn’t even know were found this far south. Now I know where to find them I’ll be back next year to give it a proper go. Another highlight was the Hobby, Thursley is great in May/June for seeing them as they feed on the abundant dragonflies. Seeing them pluck the dragonflies out of the air and eating them in mid flight is highly recommended! 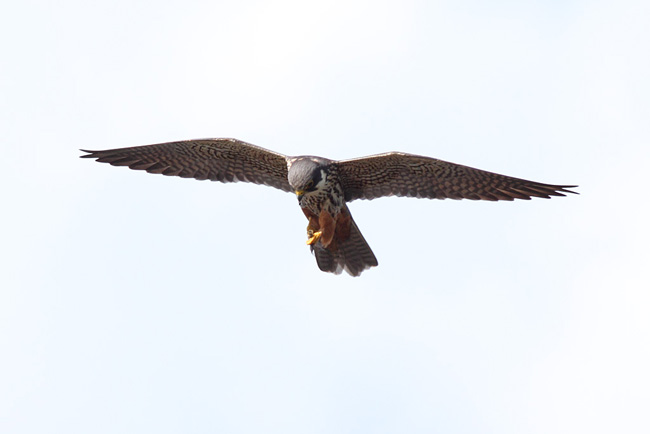 A Hobby catches a dragonfly in midflight, Thursley Common, Surrey. 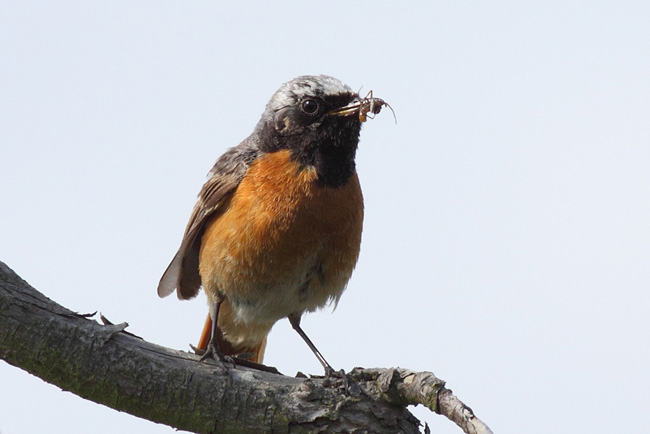 Male Redstart bringing food for one of its young, Thursley Common, Surrey. I love these birds, just stunning.

I had planned to visit Gigrin Farm for the Red Kites. I didn’t make it Gigrin, but was lucky enough to get to the Bwlch Nant yr Arian Visitor Centre near Aberystwyth whilst holidaying in Wales to see the Red Kites there. It had to be one of the highlights of the year for me, absolutely amazing to see so many Red Kites all in one place. Stunning birds in a stunning setting, I can’t urge anyone enough to go there and experience it for themselves. Didn’t make Skomer though for the Puffins, so it’s on my list still for next year!

Come late September/early October I once again made a couple of visits to Richmond Park for the Stag rut and once again got some shots that I’m really happy with. A couple made Flickr Explore, and then subsequently one made it onto the Flickr Blog. My page hits then went through the roof, I had over 4,000 hits on one day in particular, it just went quite mad! I’ve since had a Spanish online publication contact me about running a feature on how I came to make the shot, so I’ll post up a link when it goes live. 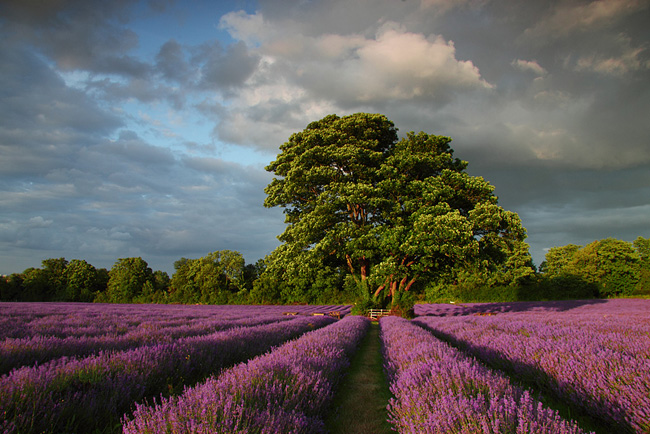 Mayfield Lavender, Banstead, Surrey. This made Flickr Explore, which was nice. 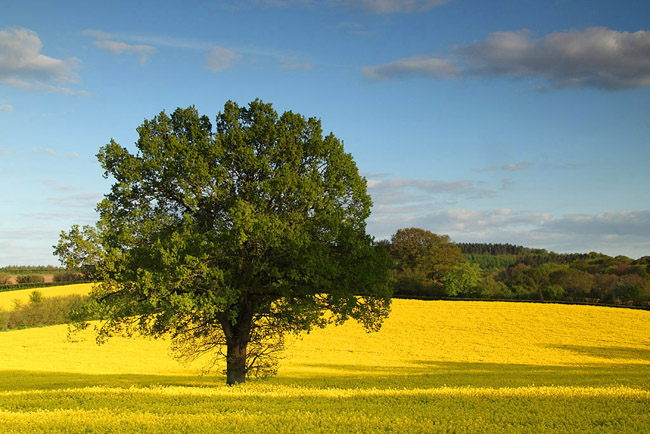 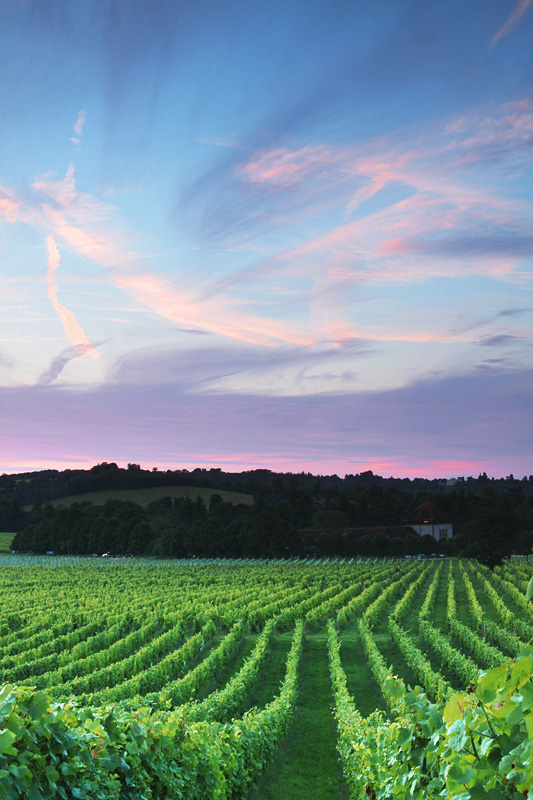 Denbies Vineyard, Dorking, Surrey. After nearly killing myself running the full length of the vineyard to be in position for the sunset, I lucked out with a nice pink afterglow in the sky.

My Surrey/Hampshire project went well, there were basically 4 shots on my wanted list – rapeseed field, lavender field, poppy field and vineyard. The only one I didn’t manage out of those 4 was the poppy field, so next year I’m determined to nail it. I’d also been keen to get back down to Lepe and Longstock, and managed to tick both of those off the list. 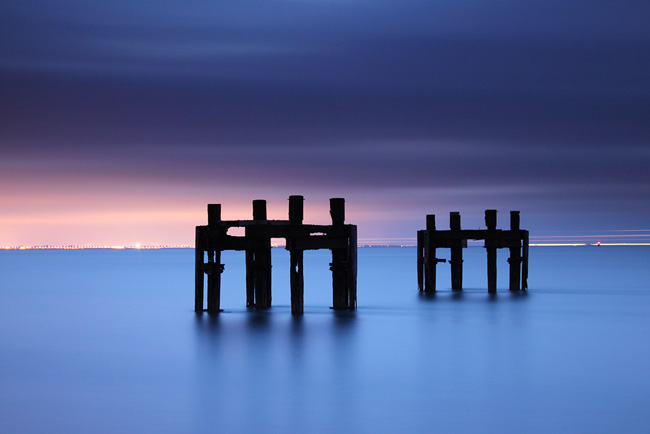 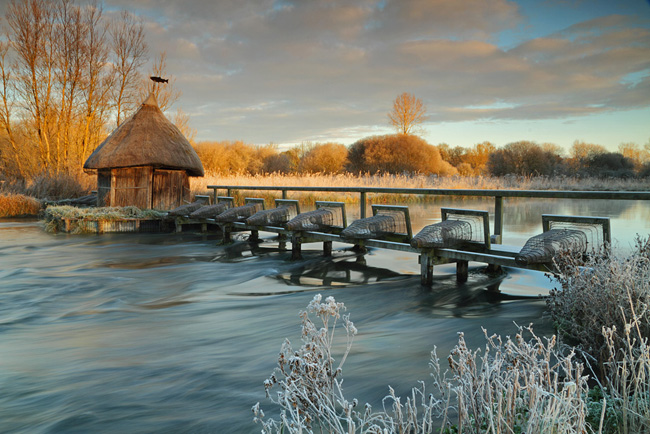 Fishing Huts and Eel Traps at Longstock on the River Test. This was one of the first really hard frosts of the winter, and the morning light was pretty special too.

The workshops with Doug Chinnery went very well. First up was a Camera to Computer Workshop in Weston-Super-Mare in February, and second was a Long Exposure Workshop in Brighton in June. I’d long wanted to get some shots of the West Pier there, and I think they were my most successful from the day. More recently I revisited Brighton in the hope of capturing the Starling Murmurations. They didn’t really put on much of a show unfortunately, but the sunset was stunning, so it was far from a wasted trip. With the winnings from LPOTY I was able to sell my 500D and finally upgrade to a 7D, courtesy of ebay, and Brighton was it’s first outing. Although I’m still getting used to it, I’m excited about the opportunities it opens up.

Seeing some of the winning entries from LPOTY I’ve been inspired to get out and do more landscapes. I loved Alex Nail’s shot of Pen-y-Fan, so I’m determined to get up a mountain or two and attempt to capture some dramatic mountain scenes. Inspired by the work of Paul Keene and Omer Ahmed I’m keen to get out and shoot some frosty and snowy scenes. I’m also yet to witness a cloud inversion so I think I might be making a trip or two to the South Downs in hope. I loved Simon Park’s storm shot, even if he did keep me off the top spot(!), and would love to get some extreme weather shots if the opportunity arises.

On the wildlife front I feel I need to broaden my scope and capture a few more species. I would love to shoot the Mountain Hares in the Peak District, but I’m not sure funds will allow it. I think a trip to the east coast might be on the cards to see the seals though. Maybe even otters too, although I need to put in some research. Returning to more familiar subjects, the Short Eared and Barn Owls are still very much a priority, and I’m sure I’ll also return to my favourites, the deer at Richmond Park. I’d love to get some shots in the snow if I can to round out my portfolio. Whatever happens I’ll look forward to what 2013 brings and can’t wait to get out with the camera to experience something new.

Thanks to anyone who’s passed by this year, I hope you all have a very merry Christmas and a Happy New Year!