Posted by giantsquid on November 7, 2018

I’m delighted to announce that I’ve won the Coast & Marine Category in the British Wildlife Photography Awards! It’s been a long time coming, I’ve entered every year for the last eight without making it into the book up until this point, and so I thought it would be a good opportunity to talk a little about some of my inspirations over the years that have led me to this point. 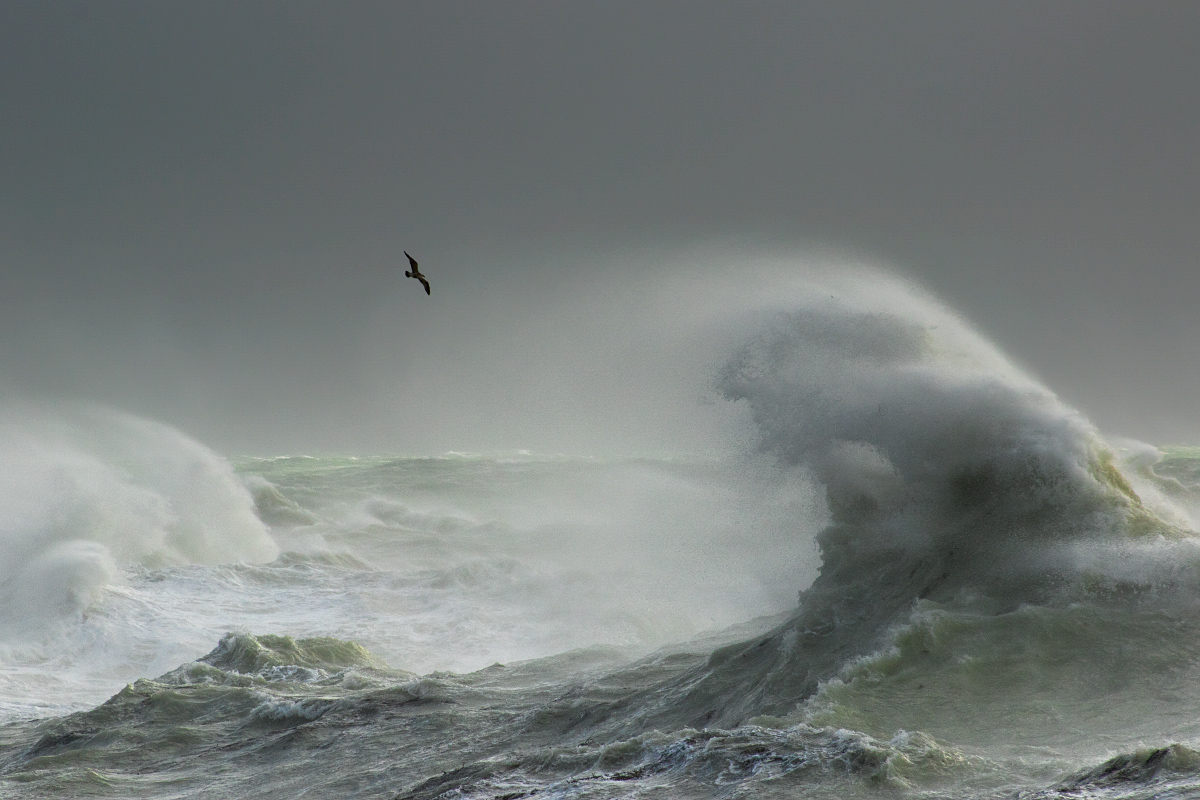 The first printed book collection from the British Wildlife Photography Awards back in 2010 was the catalyst that really set me on the path of wildlife photography. I remember pouring through the pages in awe. Marcin Zagorski‘s shot of a Mountain Hare bracing itself against a snowstorm in the first light of dawn. Craig Jones’ shot of a Barn Owl out hunting early on a frosty morning, the beautiful contrast of the warm rays of the sun in the foreground offset against the cool blue tones in the shadows. Yannick Dixon’s shots of a Starling murmuration in Blackpool. Ben Hall’s wonderfully composed shot of a Mountain Hare sheltering from the elements. Chris Elliott’s intimate shot of a pair of Great Crested Grebes feeding their young at close quarters. All these images set my creative juices flowing and I couldn’t wait to get out and try for myself.

You’ll see from a few examples below, of some of my shortlisted entries from previous years, how those images from that first Collection have gone on to influence my own work.

There are a great many shots of frame filling Barn Owls out there, but what really struck me about Craig Jones shot was the environment within which it was featured. Beautiful tones, and on a wonderful frosty morning. Fortunately I live relatively close to a Barn Owl site, at Papercourt Meadows in Send, and I’ve spent many hours there in an attempt to capture them. The shot below is probably my favourite, an occasion when I was lucky enough to be in the right place at the right time on a beautiful summer evening with the sun backlighting the owl’s wings… 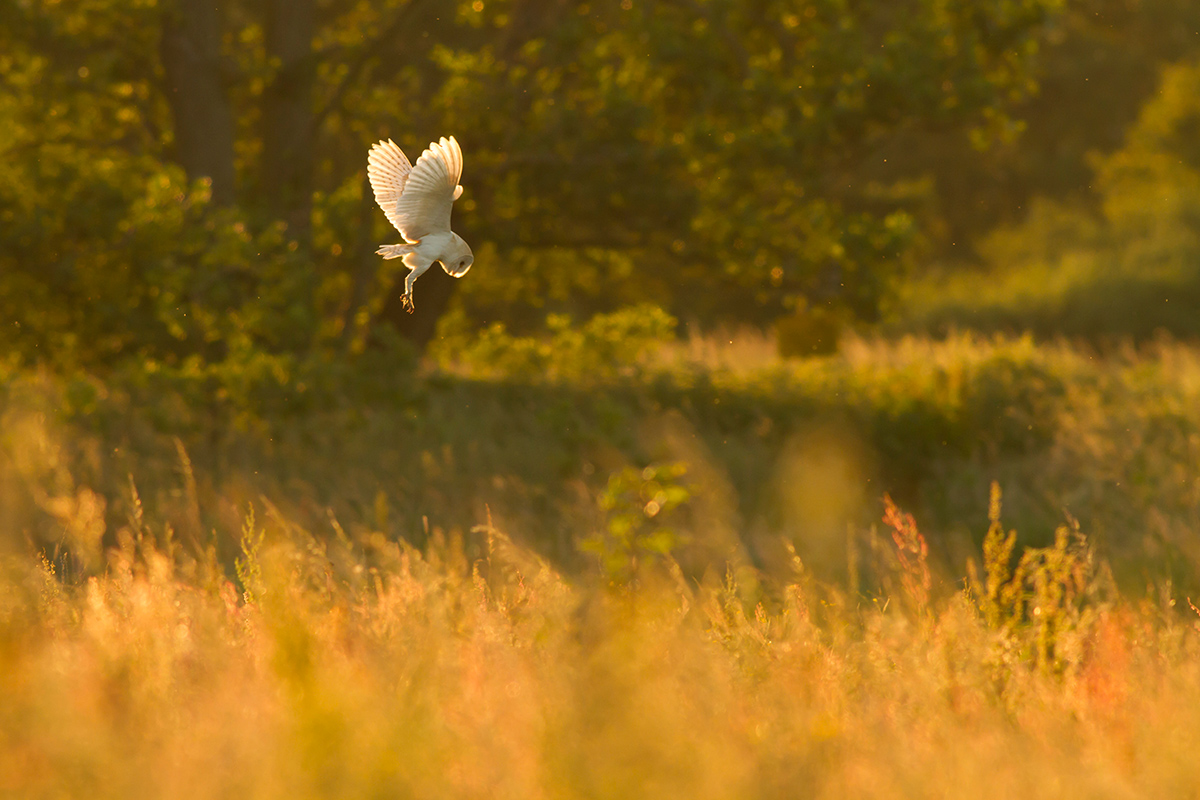 Since seeing Yannick Dixon’s shots I’ve wanted to see and photograph a starling murmuration. When I did eventually get down to Brighton Pier to see the murmurations I was blessed with some beautiful pink light, and the starlings put on quite a show.

Due in no small part to Chris Elliott’s shot of Grebes I developed something of an obsession over the years. The Basingstoke Canal, a couple of miles from home, was an excellent place to see and photograph them at close quarters and during several months through the spring and summer of 2011 I followed a family through the courtship and in turn rearing of a pair of chicks.

As for the Mountain Hares, I booked a workshop with Craig Jones in the Peak District, but in a stroke of bad fortune Craig’s car broke down. Although he instructed us as to where we might find them, without his expert guidance we were unable to locate them. So they’re still very much on my ‘to do’ list.

Listed above are just 3 entries that failed to make it beyond the shortlisting round, but this year was different of course. I managed to get 3 images shortlisted, and so my hopes were raised. Then one day in August I was on the train on my way home from work when I got the call from Maggie Gowan at the BWPA. My heart was pounding as she told me that my shot had ‘done rather well’, and had won the Coast and Marine Category. I’d have been ecstatic just getting in the book, but to actually win a category was more than I could ever have hoped for, a dream come true.

The shot was taken late last year when I travelled down to Newhaven to see and photograph Storm Brian as it hit our shores. You can see it’s influence in a couple of shots by New Zealand photographer by the name of Richard Sidey, of gannets flying low over a turbulent sea. The conditions at Newhaven were perfect to try and create something similar myself; 80 mile per hour winds, massive waves, and the sun poking through the dark clouds to give some great light. It was one of those rare days when you get half a dozen or more photos you’re really pleased with, and a fateful day indeed. Two photographs from that day have now received awards – the first in the Outdoor Photographer of the Year 2017, and now this one.

The awards ceremony was held at The Mall Galleries in London, and I was presented with a certificate, a Canon EOS M5 camera and a copy of the book by TV presenter Miranda Krestovnikoff.

Looking like a rabbit caught in the headlights, with my award, presented by Miranda Krestovnikoff 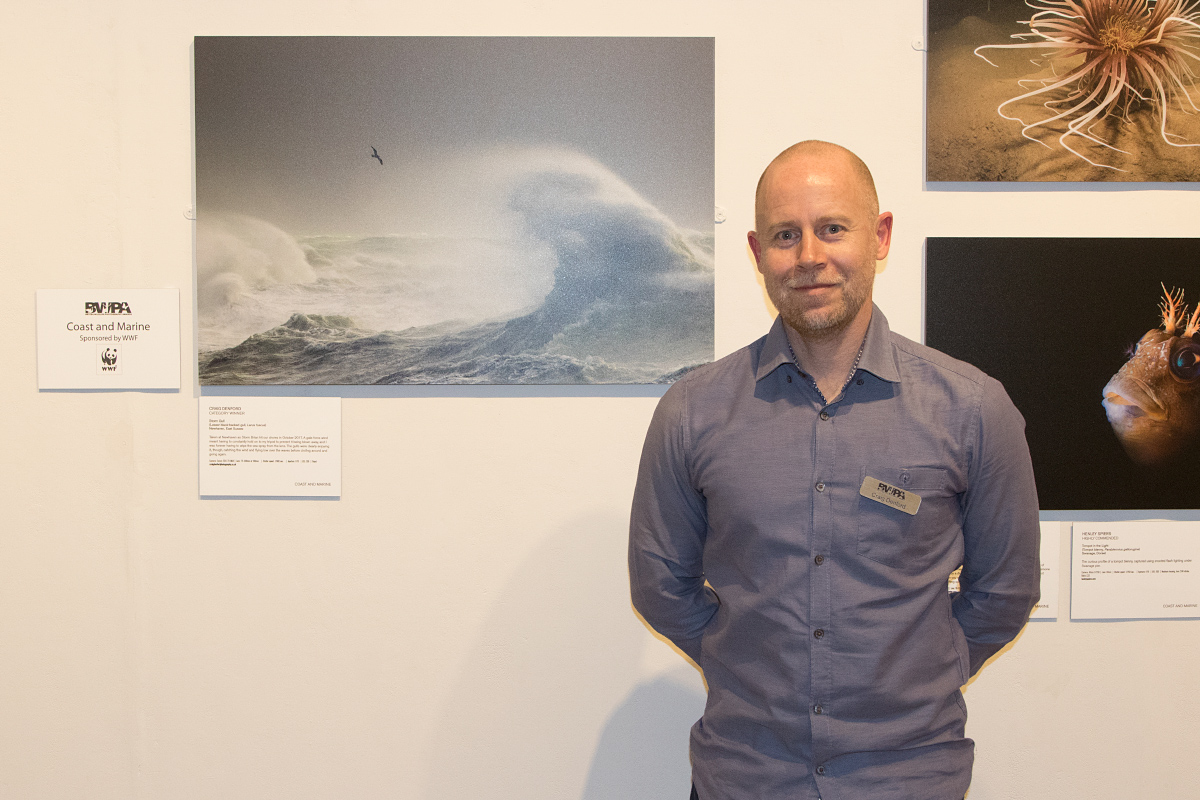 Shame about the wonky badge 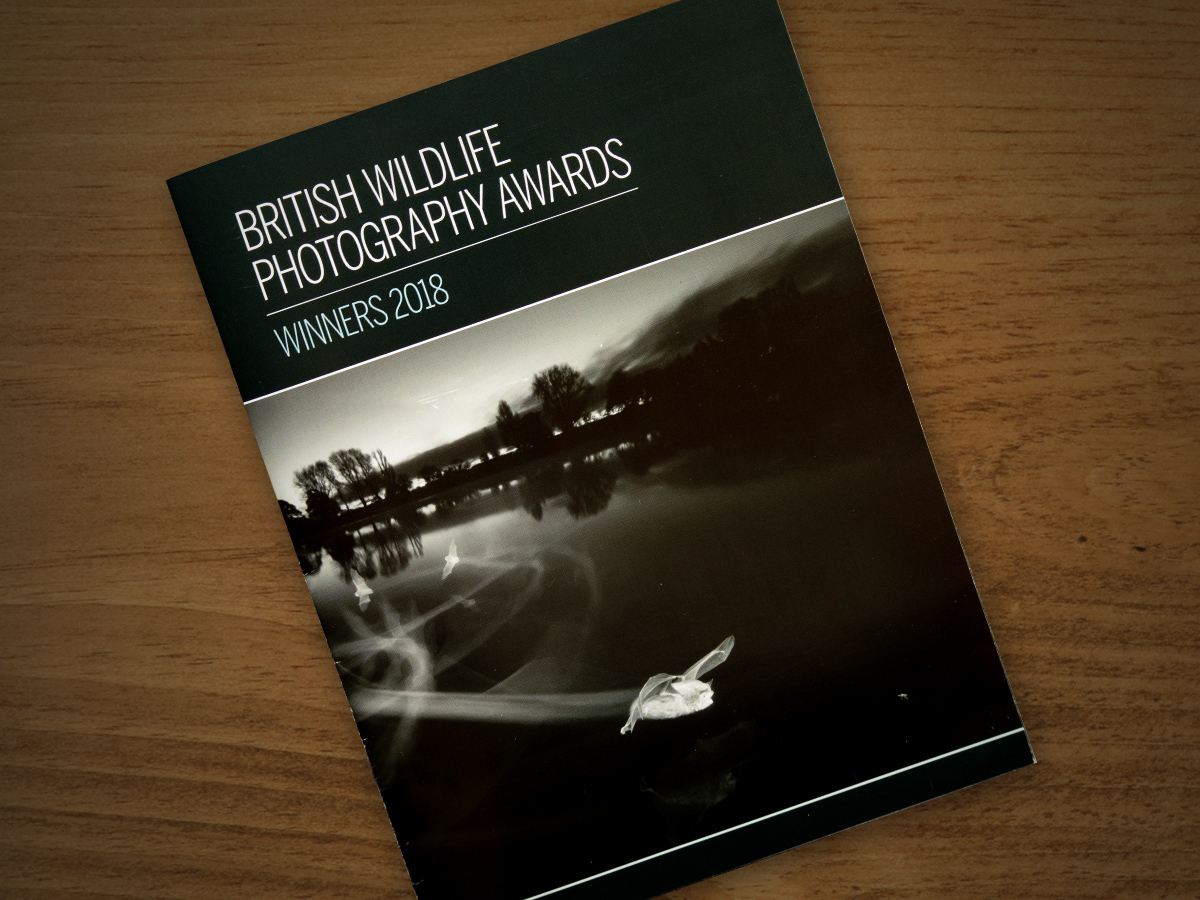 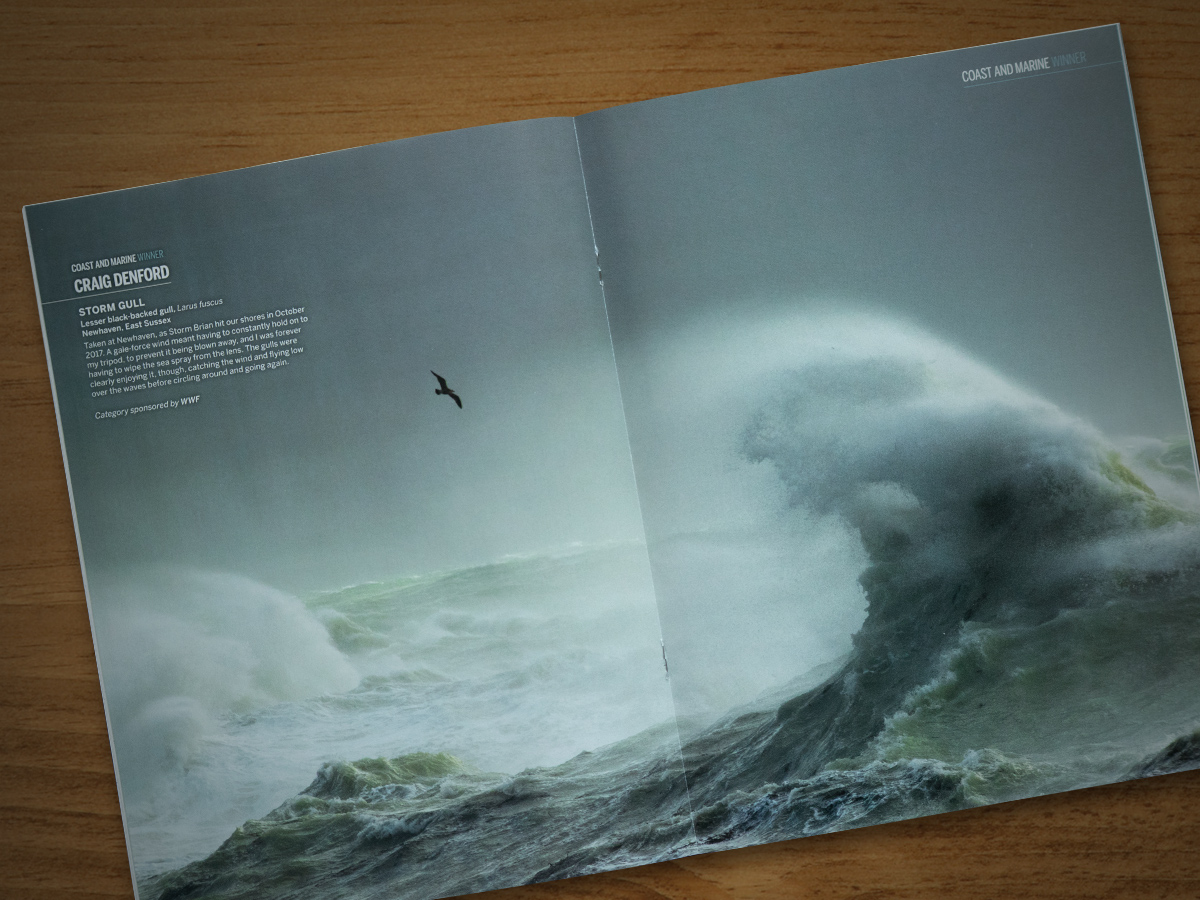 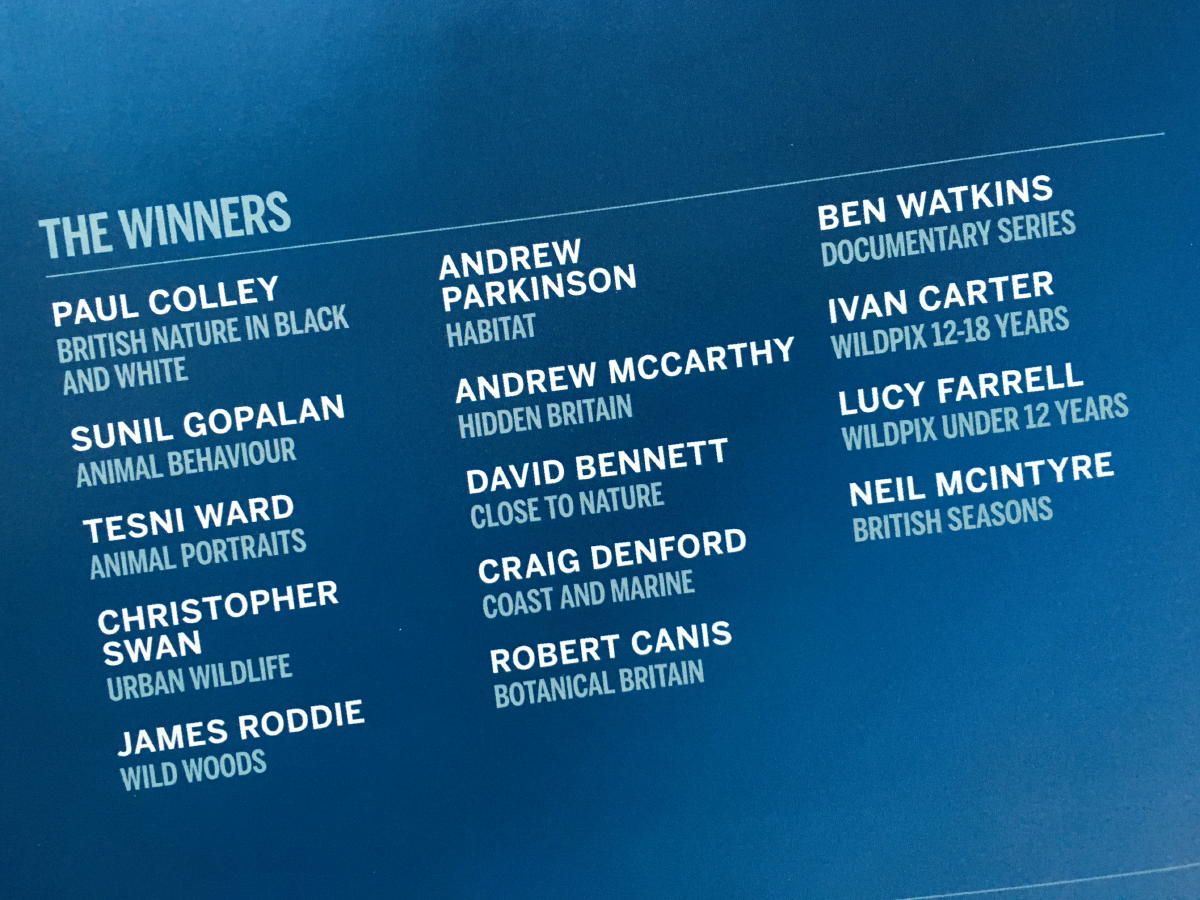 Congratulations to all the winning and commended entries in the competition. So many fantastic images, I think Paul Colley’s overall winning image is extraordinary for the amount of time and effort and technical precision involved. Anyone wishing to buy the book can purchase it here. The quality of the print is outstanding, a beautiful and highly recommended publication.