I’ve always been fascinated by Iceland, and it was our original intention to honeymoon there, but instead ended up going to Canada. But I always intended to one day make it here. With the advent of 2 kids I hadn’t been away outside Britain for some time, but with air fares to Iceland being really cheap it began to look like a possibility. My only problem was finding someone to go with, and for a while nobody seemed interested. Then Big Rich stepped up and said he’d love to come, and when mentioning it to another friend, Colin, he then wanted to join us, and finally Grant then decided, at the very last minute, that he too was in. I was quite relieved when Grant joined us, as a fellow photographer he’d be a useful ally when the others had decided we’d stayed really quite long enough in one spot taking photographs!

We decided that as it was only the one week we wouldn’t try and spread ourselves too thinly and so planned the route to spend a day or two in Reykyavik before sticking to the south coast, heading east as far as Hofn before heading back the way we’d come.

The Blue Lagoon
As we touched down at Keflavik airport we were greated by bright sunshine and a cloudless sky. We picked up the 4×4 hire car and headed straight for The Blue Lagoon, a geothermally heated, bright blue pool thick with mineral deposits that I’m told are very good for the complexion. You can also buy a beer in the middle of the pool, it was all so nice and relaxing none of us wanted to get out. After 4 hours we eventually dragged ourselves out and headed to Reykyavik to book into our hostel. 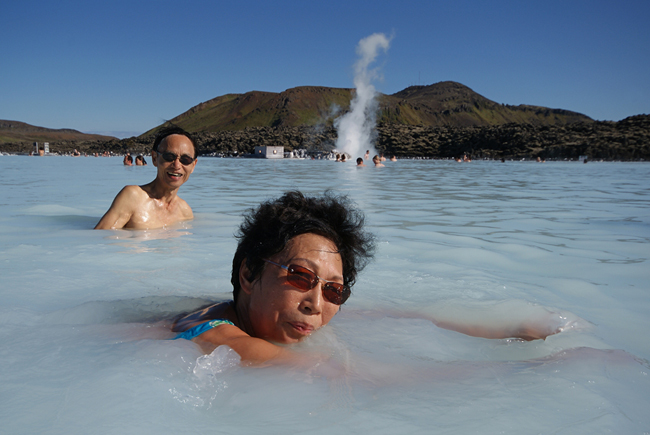 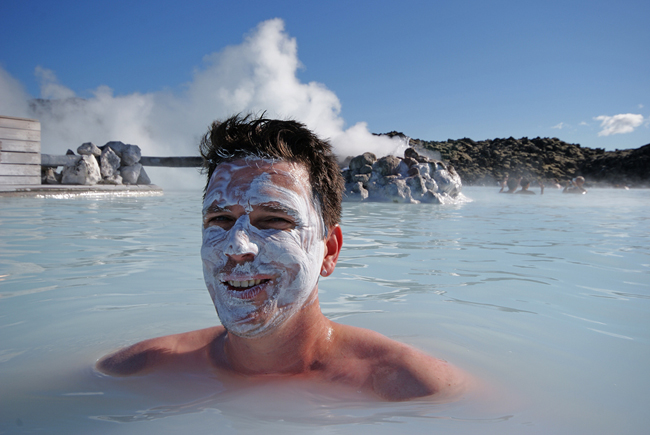 Colin was intent on having Lobster Soup in an authentic Icelandic restaurant, but the first night we were running out of time and ended up in an american style diner with a sarcastic waitress. I was just glad to see the locals had a sense of humour, even if she was taking the mick out of us.

The following day we went whale watching. As well as a humpback we had a minke whale pass right under the boat. It was one of those times I should’ve just put my camera down and enjoyed the moment, as in trying to photograph it I missed most of the action. Ah well.

That evening we did actually get to eat in a little restaurant on the sea front. Colin got his Lobster soup, and I think I had tuna salad or something similar. Also on the menu was Minke Whale, which I wasn’t too happy about, but decided against launching a protest. 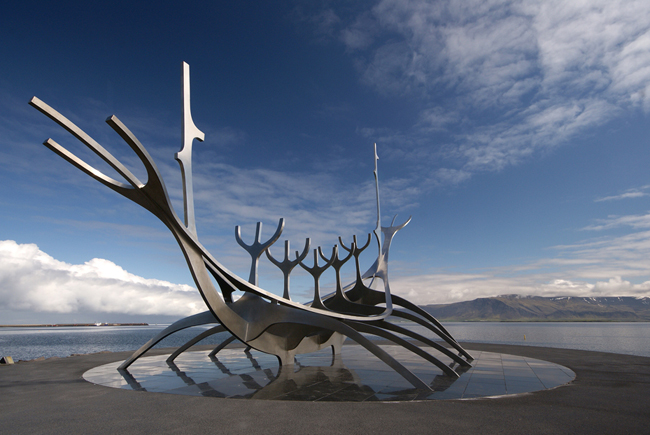 Gullfoss and Strukkor
The following morning, after photographing the Viking Sculpture on the sea front we headed out to Gullfoss, a massive waterfall, I think the second largest in Europe and an awesome sight(Dettifoss in the north of Iceland is the largest). On the way we also took in the Geysir, Strukkor, that must shoot up a hundred feet plus into the air and goes off every 10 minutes. After exhausting Gullfoss we started making our way to the next hostel at Skogarfoss. 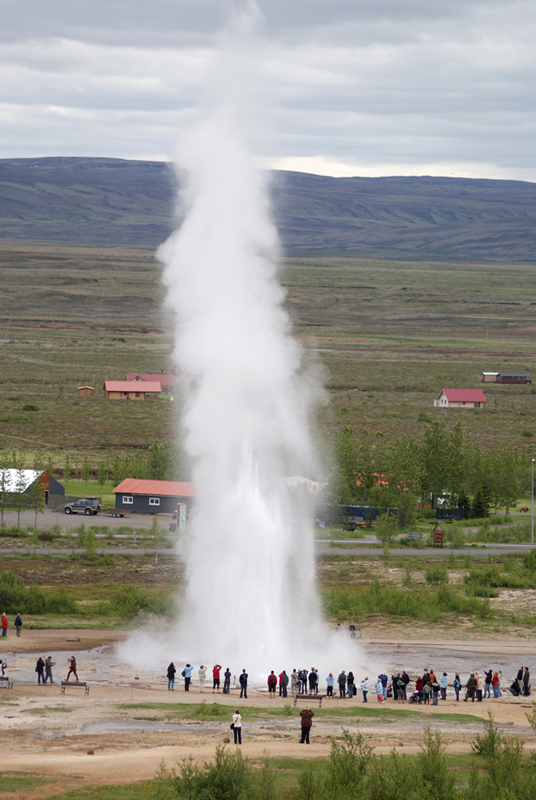 Strukkor blowing off some steam 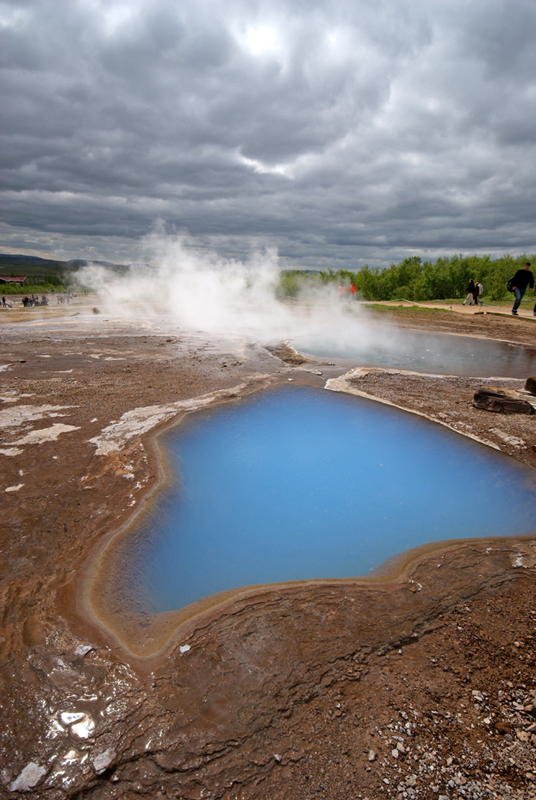 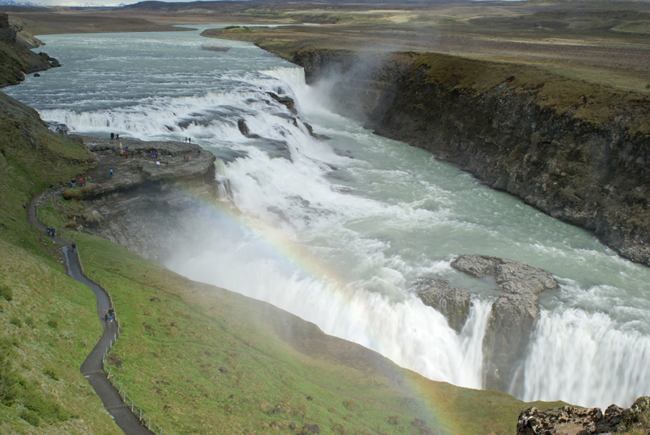 Seljalandsfoss
As the evening light began to kick in we rounded the corner to be confronted by the truly beautiful sight of Seljalansfoss sitting pretty in the middle of the landscape. I’ve always had a thing about waterfalls, and Iceland being ‘The Land of Waterfalls’ is certainly the place to be, and this was probably the most beautiful waterfall I’d ever seen. It’s around 60 metres tall, with the added bonus that you can walk behind it. We spent a good couple of hours here photographing before deciding it really was about time we made our way to the hostel. 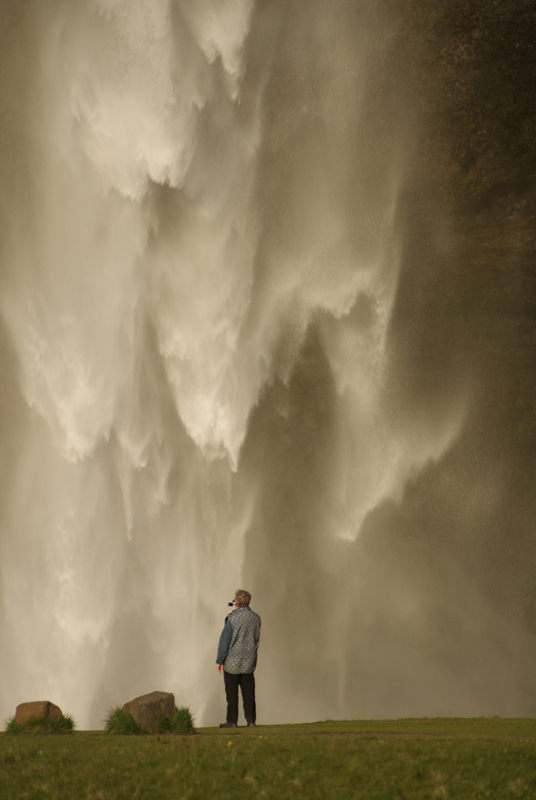 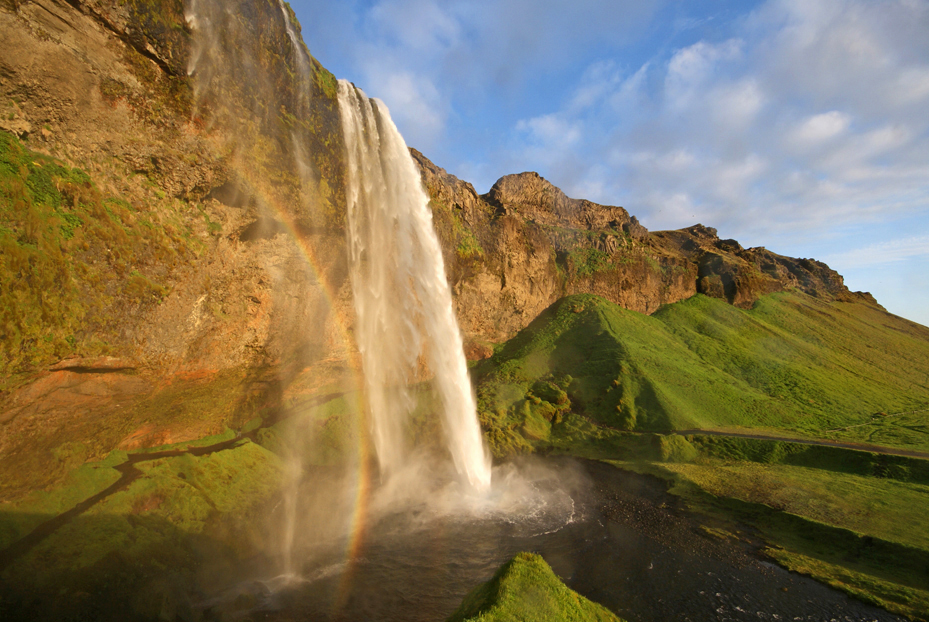 Seljalandsfoss. To give a sense of scale you can just see Big Rich about to walk behind the rainbow. Not looking quite so big here.

When we got there they’d locked the front door! We managed to persuade one of the tenants to let us in, and then I had to ring the owner, who’d long since gone home, but thankfully she wasn’t too annoyed, and thankfully our beds were still available.

Skogarfoss
The hostel sits at the base of yet another awesome waterfall, Skogarfoss, so we spent the following morning here, before pushing onward to our next stop at Hvoll. 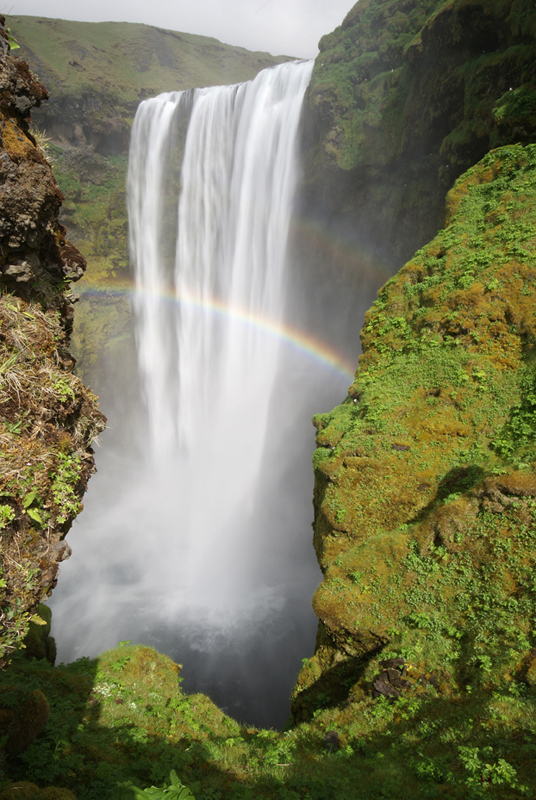 On the way we stopped at Vik for lunch and had a look round. We found an Artic Tern colony and spent a good hour amongst them, being dive-bombed as we tried to photograph them! 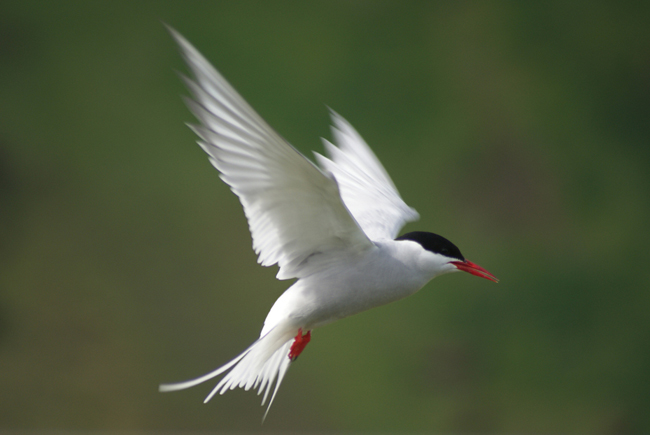 Hvoll on the map gave the impression of being a large town, but in actual fact was just a hostel in the middle of nowhere, although in Icelandic terms I suppose that does constitute a town! It was however, the nicest we stayed in, brilliant facilities, really nicely kept, and some great photos on the walls for inspiration.

From Hvoll we travelled out the following morning to the turf roofed church and houses. The church is tiny, the smallest church in the country. If you go inside there’s a piano, a small altar and pew, and that’s about it. 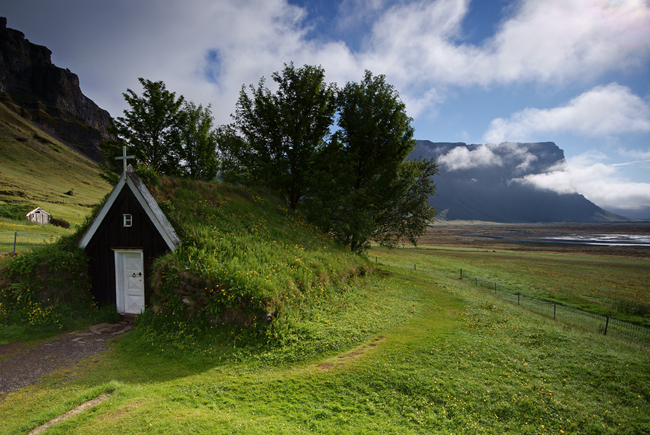 Vatnajökull
We then headed toward Skaftafell National Park, with the largest ice cap in Europe, Vatnajökull. Just before you get there you’re confronted by a sculpture of 2 of the steel girders from the bridge that was destroyed when the volcano exploded in 1996 and sent massive icebergs and floods downriver. 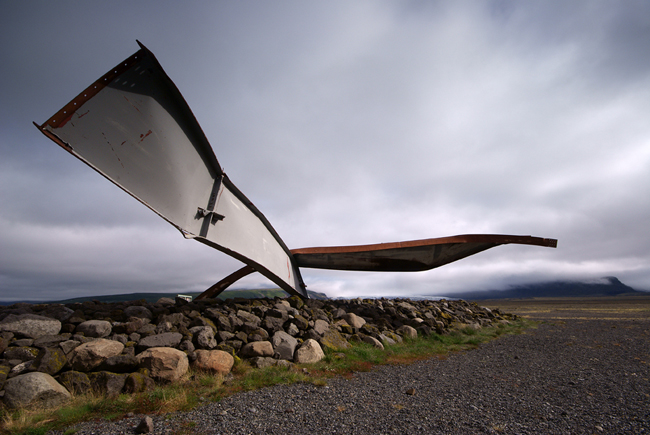 We booked an ice hike on the Svínafellsjökull glacier, one of the tongues of the Vatnajökull ice cap. Another great day blessed with great weather. 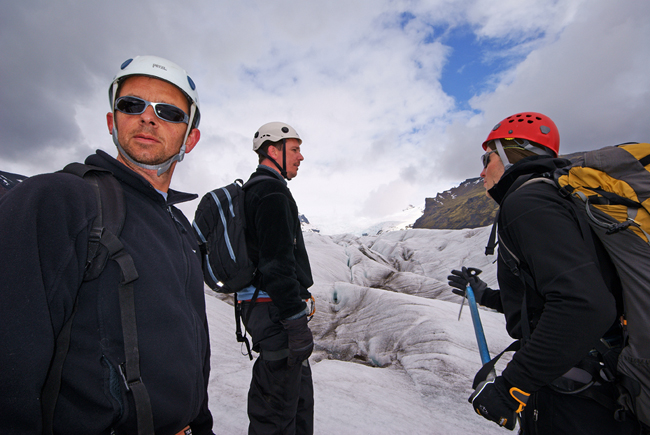 Grant and Rich Ice Hiking on the Svínafellsjökull glacier, Vatnajökull, with our guide from the Icelandic Mountain Guides. See what they've done there.

After we’d had a nice cup of tea we then hiked up a steep climb to yet another waterfall, Svartifoss, distinctive due to the basalt columns that surround it. 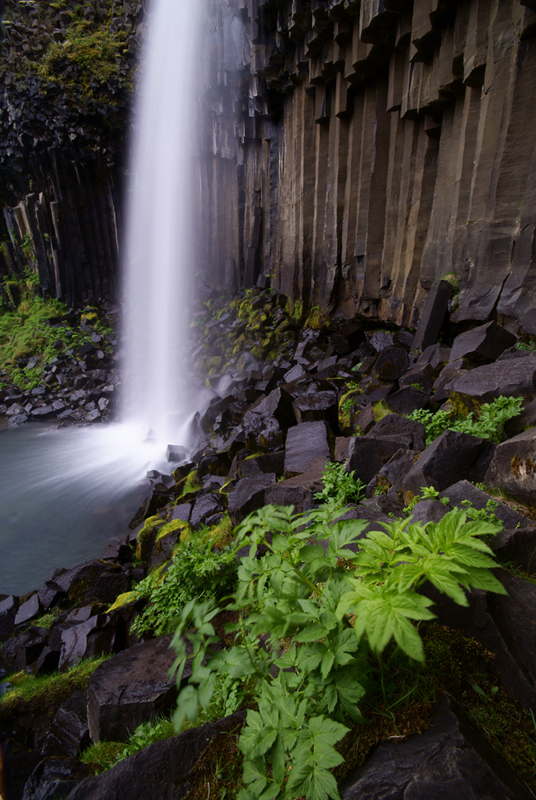 Svartifoss. Just behind me was a massive column that looked just about ready to come down. I was glad to get the shot and move the hell away from there!

The following day we started making our way to Hofn, stopping off on the way at the magical Jökulsarlon, a lagoon that has 3 or 4 glacial tongues feeding into it. The lagoon is filled with ice bergs that slowly float out to sea, a very serene atmosphere. Big Rich got into the spirit by sitting inside a small stone circle with a bottle of vodka and his iPod. The lagoon also has a number of Harbour Seals that I was able to get reasonably close to before a couple of idiots just charged straight up to them. Thanks then! 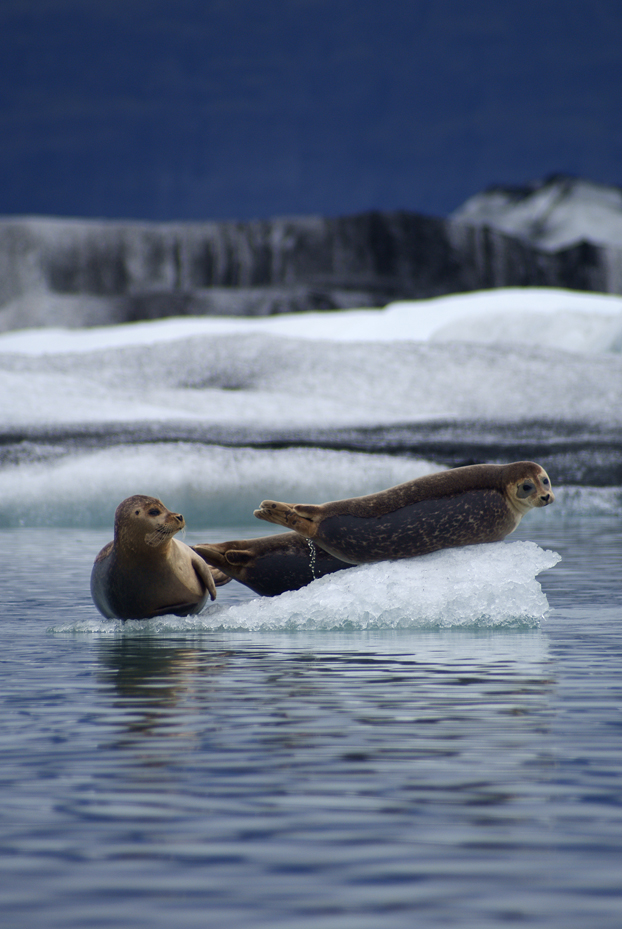 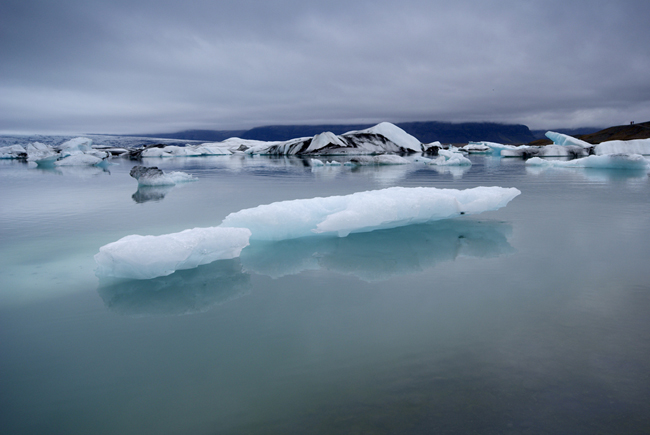 Höfn was not what we expected at all, almost a ghost town with very few people on the streets. Rich had been to Iceland before and insisted we try horse-riding as apparently it was ‘really easy’, so we decided to give it a go. I’ve never been too keen to get on a horse, it seems an awful long way down, but with Icelandic horses being considerably shorter I thought I’d give it a go. Can’t say as I felt too comfortable but managed to stay on, which is more than can be said for Colin, and the sight of 6 foot 4 Grant with his legs dangling almost to the floor on a horse with a mind of its own made it all worthwhile.

After a night spent at Höfn we began the journey back. The weather took a turn for the worse, we re-visited Jökulsarlon but the rain took the edge off it. We stayed for another night at Hvoll before heading back to Reykjavik. We thought it might be a good idea to head through the middle and see the brightly coloured rocks and steam pools. Petrol was running a bit low but we thought it would be ok, until that was we came across a stream running across the road. We’d been warned against trying to cross these, cars can very easily get lifted up and swept downstream, but we’d come so far it seemed too much hassle to drive all the way back and petrol might become a factor. Colin in his panic decided to reverse the car into a rock, smashing the rear tail light. Rich waded through the stream with his trousers rolled up to see how deep it was. We were very close to doing it before an Icelandic couple turned up in their car, and laughed at the suggestion of crossing. So we turned back, and I thank God we did, because the bill for that car would’ve left us all in debt for a number of years! 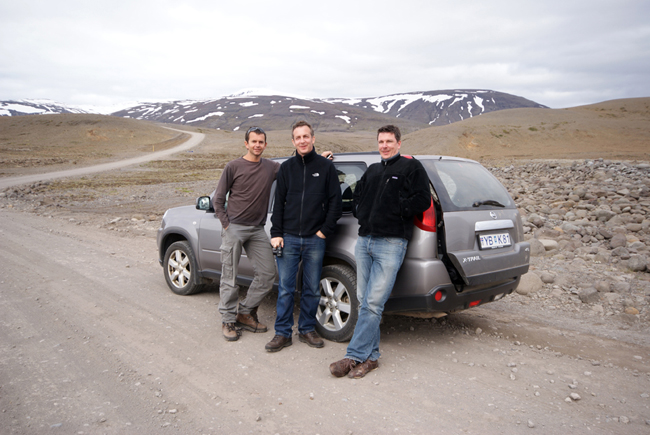 Grant, Colin and Rich and the 4x4 during happier times before its 'little accident'

We visited Þingvellir on the way back, where you can stand between 2 continental plates, so I’m told one of only 2 places in the world you can do that. Don’t ask me where the other one was because I can’t remember. We had a last night out in Reykjavik before returning the car and thankfully being able to distract them enough during the inspection for them not to notice the smashed light.

I’d definitely recommend Iceland to anyone. At only 3 and a half hours away there’s the proximity in its favour, but far beyond that is its unique landscape. Mile upon mile of solidified lava fields with very little vegetation, stunning waterfalls, glaciers and an abundance of wildlife. The people are very friendly, but also very curious, you’ll notice them staring at you which is a little strange at first. Don’t think I would ever get used to their water, being pumped up from the ground their heating bills are very low but the downside is it stinks of sulphur. Next time I go I’ll hope that it coincides with another volcano going off, now there’s a shot just waiting to be taken!