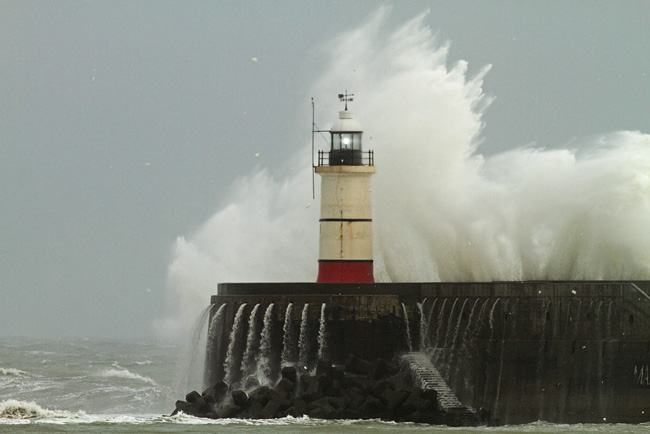 Lighthouse, West Quay, Newhaven. This was the shot I had in my mind for all these years, awesome to see and experience it.

Ever since I saw Gail Johnson’s picture of a massive wave slamming the side of a lighthouse in the 2008 LPOTY I’ve been looking to shoot something similarly dramatic. So it may’ve been 5 years in the planning, but you can’t rush into these things! I wanted to be as sure as I could though, until conditions were just right. Newhaven isn’t exactly around the corner for me, but with hurricane force winds predicted overnight I don’t think conditions could’ve been any better than they were. Thankfully I didn’t have anything else planned so I made the (rather tedious) journey to the coast. Tedious due mainly to a massive tailback on the M3 that had me fighting my way across country to get back on track.

Two and a half hours later and I was finally in Newhaven. As I rounded the corner and the view opened up I soon realised it was worth it. Waves were crashing against the sea defence and lighthouse. I’d packed some plastic carrier bags to protect the camera from the sea spray, but as soon as I opened my camera bag they caught the wind and disappeared. Ah well, there went that idea. Holding on to the tripod legs was similarly fraught, so sheltering behind a wall seemed the best idea. Thankfully it wasn’t raining, which was one less thing to contend with, but unfortunately the light was a little flat. I started shooting at 400ISO but very soon had to push to 640 to cope with the worsening conditions. I was hoping for some late burst of dramatic last rays of sun but it never materialised. 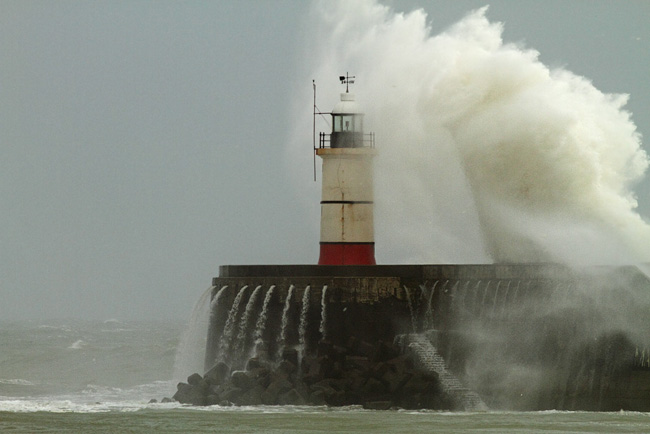 Similar, but different. There’s a lot more of these where this came from!

I concentrated first on the west side of the defence, keen to get a frame filling shot of the lighthouse. Once I was sure I had a couple of good ones I then went to the east side, and here you could see and feel the full force of the wind. The power of the waves was incredible, I don’t think I’ve ever seen anything quite like it. But then I am from Surrey. 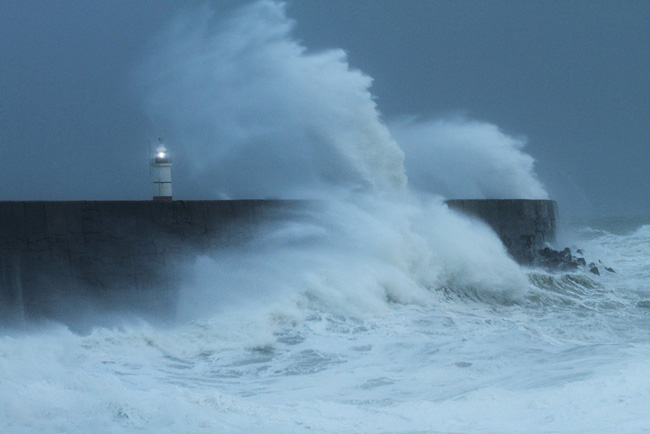 Taken from the other side, untempered by the sea defences you could see and feel the full force of the gale. Incredible. 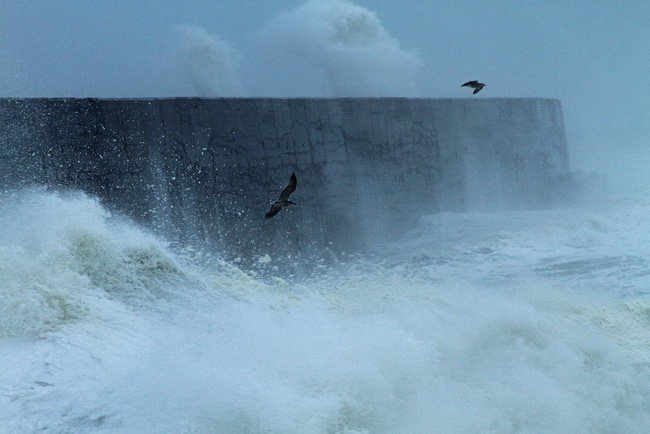 The gulls seemed to be enjoying it. 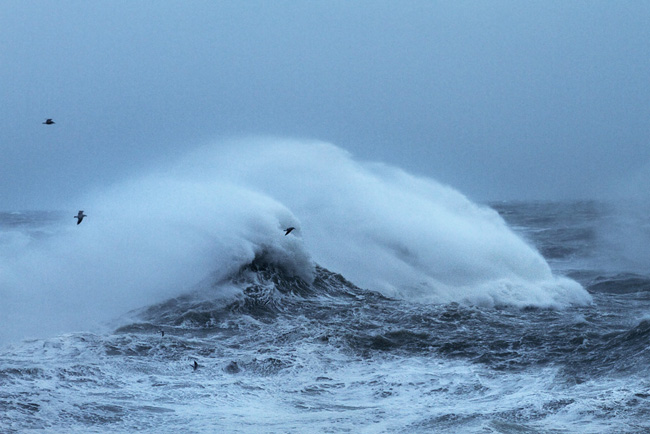 I got a few shots of the waves breaking on the defence, and then an RNLI Lifeboat came into view. A 14 year old boy had been swept out to sea. The lifeboat was swaying wildly from side to side and at times looked like it would get engulfed by the massive waves. But they soldiered on in their attempts to find the boy and at times seemed to get dangerously close to the sea defence. Soon after a helicopter arrived, not to mention several police cars and ambulance. 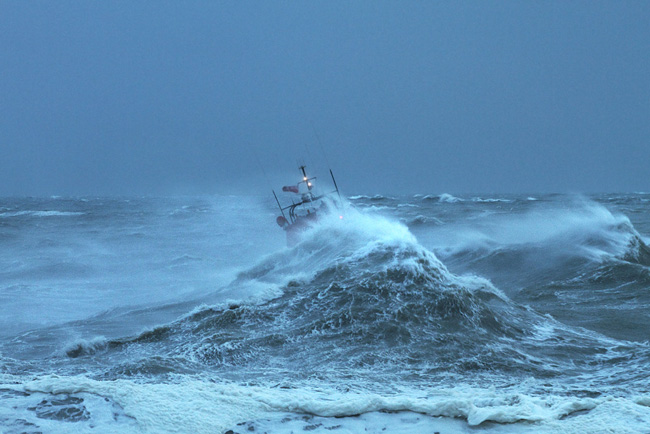 Hopefully this gives an idea of what they had to contend with. 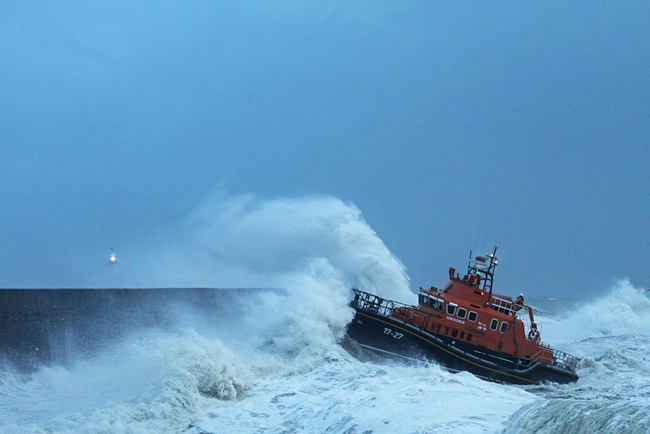 RNLI Lifeboat, Newhaven. So full of admiration for these guys to put themselves at risk to try and save another. What an incredible job they do. 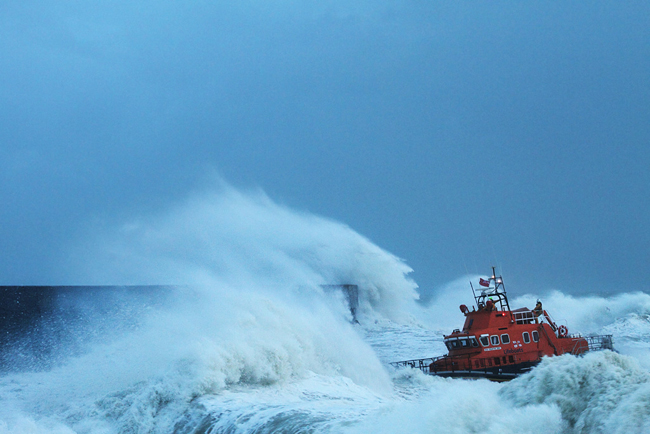 At times they looked like they were going to get engulfed by the massive waves.

By this point the beach was swarming with onlookers and the emergency services, and we were moved off the beach. I heard later that they continued to search until 10 o’clock, before having to call it off. A very tragic ending that only serves to underline just how dangerous these conditions can be.

3 thoughts on “Storm Brewing at Newhaven”