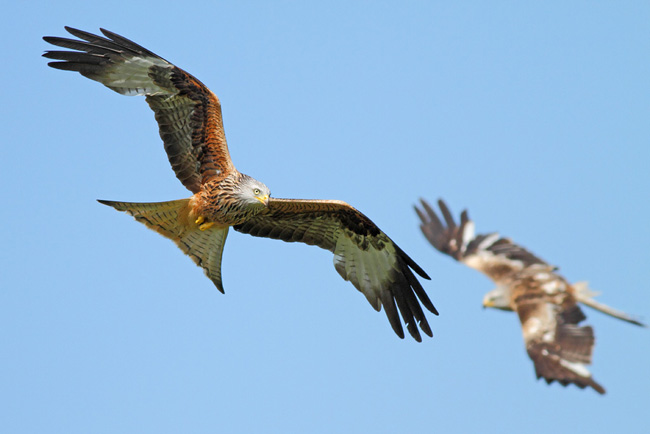 I’d been to Skomer 5 years ago, but it turned into something of a disaster. Our kids were both very small at the time, we had no food or drink, and after attempting to carry them for as long as we could it soon became apparent we were woefully under prepared. I managed a few minutes with the Puffins before I had to cut my losses, and so it was very much unfinished business. I was also keen to photograph the red kites again, and so combining the two over a weekend seemed like a very good idea. As good as the feeding station is at Bwlch Nant yr Arian, the one problem is that you can’t get quite close enough to the Kites to fill the frame, so I wanted to see if things were any better at Gigrin Farm. I booked a couple of places in the Gateway Hide and hoped for the best.

And so it was that Colin and I set off at 7 in the morning from West Byfleet and headed for mid Wales. Despite a slight hiccup with the sat nav when Col decided to select the ‘non-motorway’ option we got there in very good time and waited for feeding. Once the action began it soon became apparent that the main problem would be not cropping off wings, they were that close. In hindsight I would’ve booked one of the higher, open top hides as I lost a few shots when trying to track them overhead. But after a couple of hours of full on action I was very happy with the shots I’d managed to get and my main problem was going to be freeing up space on my memory card for the Puffins. 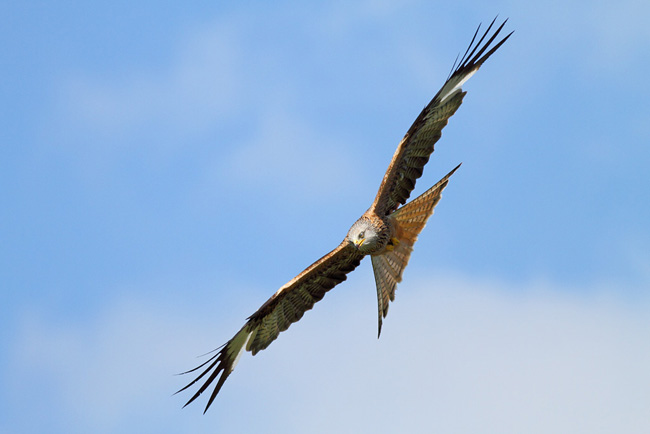 The size of these birds takes the breath away, their wingspan is enormous. I just think they’re awesome. 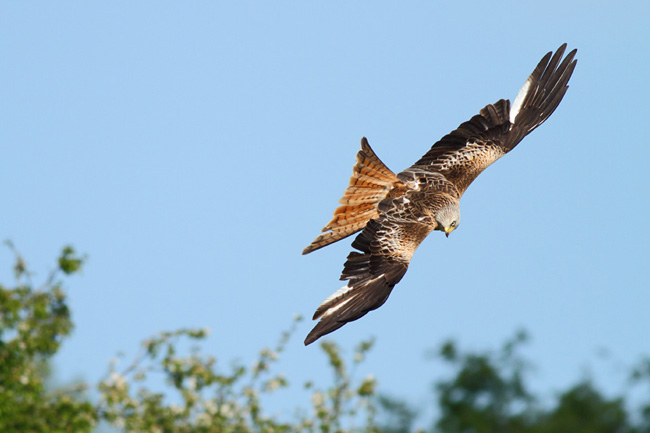 Looking ominous as he comes in for the kill! 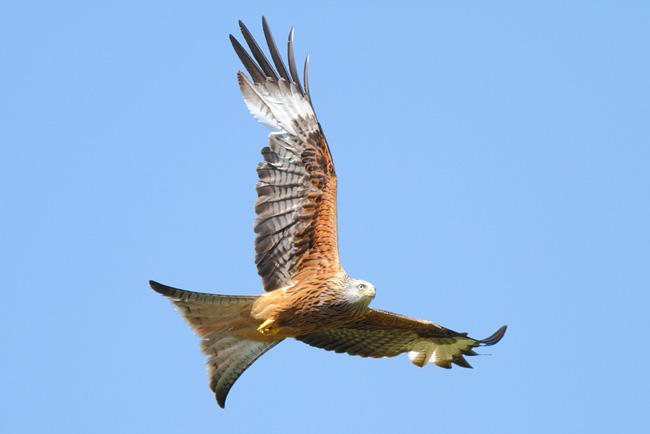 I was desperate to get one of them diving. It all happens so quick it’s very difficult and I began to get increasingly frustrated. I think it’s time I bought a gimbal head. This one was just too close, but there’s something about this one that I really quite like.

We then made the journey down to the western tip of Wales to the campsite at West Hook Farm. If you’re looking to make the pilgrimage to Skomer then you couldn’t choose a better campsite to stay at, it’s literally a 5 minute walk to the ticket booking office, and the view out across the bay is beautiful. We were treated to a beautiful sunset before the night drew in. After a couple of beers I then had to try and get some sleep before getting up at 6 the next morning to stand in the queue for the landing pass and boat across. What sounded like a sleeping elephant next to me had other ideas though, so I can’t really say I had the best nights kip. 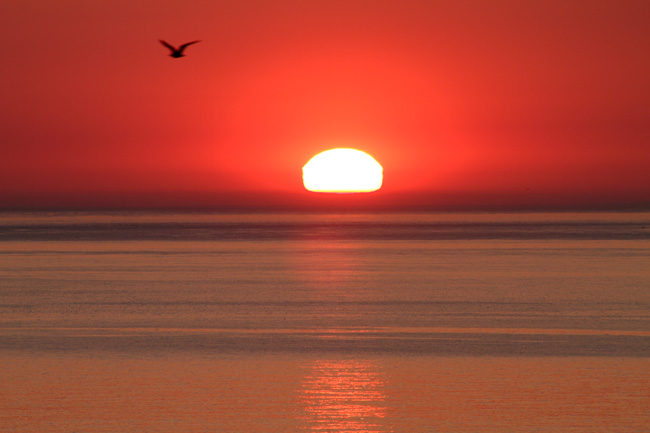 I did however make it to the queue by 7 the next morning, but even then around 20 people were in front of me! So if you’re planning on a Skomer trip get to the booking office as soon as you can to avoid disappointment. Whilst queuing I was joined by Euan and Mike, who’d come down from Cardigan for the day. With tickets in hand we made our way down to the boat, and on visiting the Gents came upon a couple of nesting pairs of swallows! I would’ve got my camera out but didn’t particularly want to get myself arrested over a ‘misunderstanding’!

So leaving the swallows to their own devices we boarded the first boat across at 10, which gave us 5 hours on the island before the boat back. Once on the island Colin and I headed straight for the Puffins, while Euan and Mike headed in a different direction. 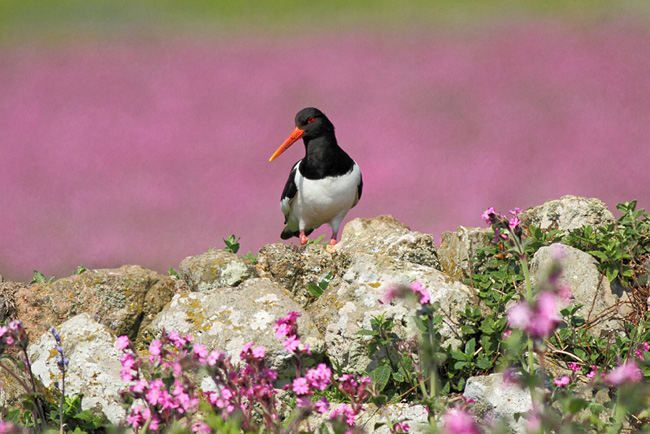 The colour on the island was just breathtaking, and it makes a lovely backdrop for this Oystercatcher.

Col and I then proceeded to spend the next 3 and a half hours with the Puffins before deciding we ought to perhaps venture further afield. 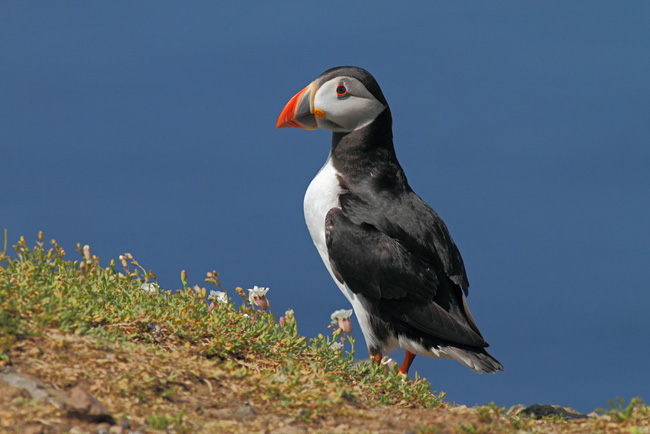 Thought I better get the obligatory Puffin portrait in the bag before attempting something a little more challenging. 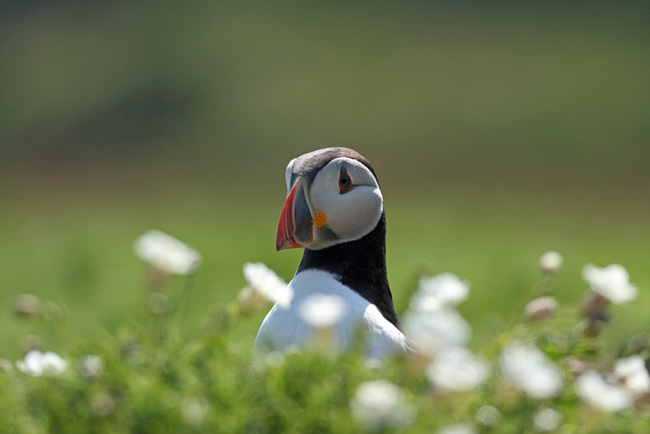 Thought this one looked quite cute poking his head up over the flowers. 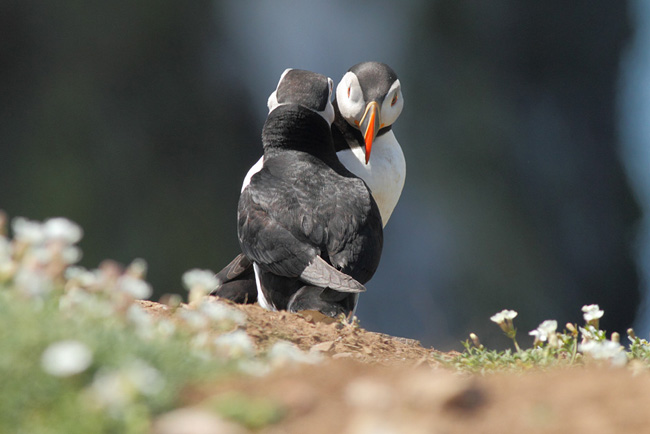 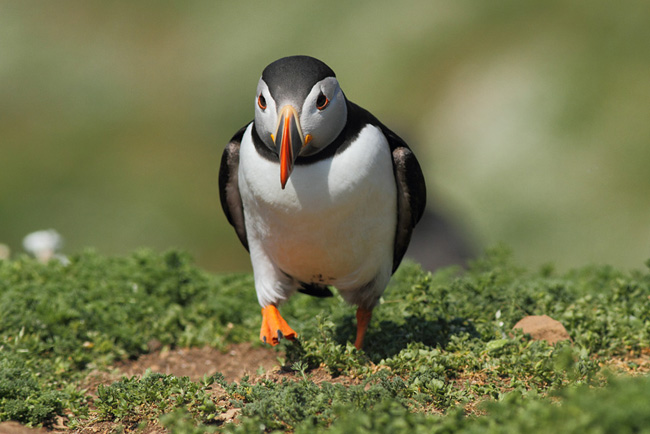 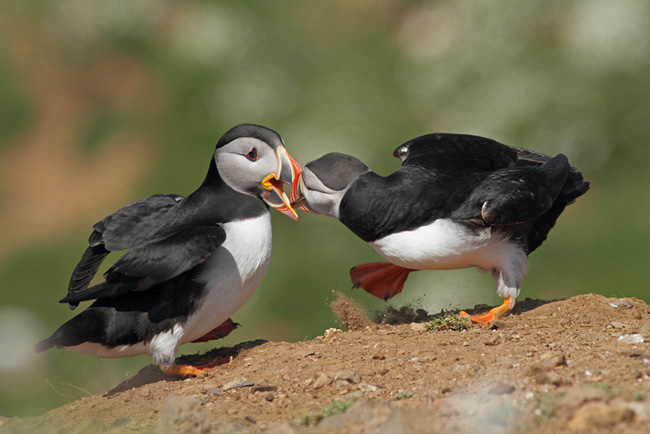 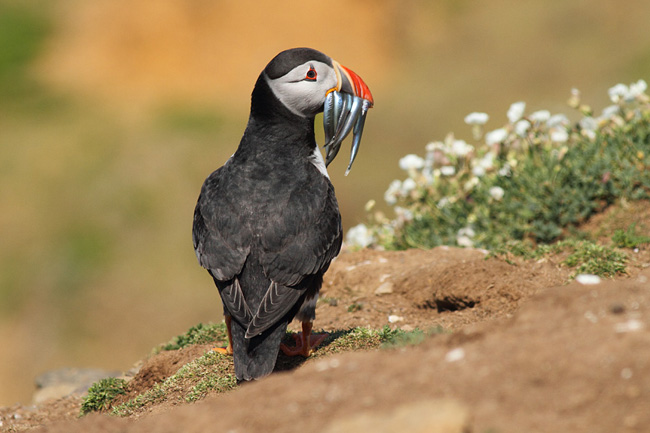 Really glad to get this one. There were quite a few large gulls terrorizing any Puffins that came back with Sand Eels, and so I think the human presence was quite welcome as it offered the Puffins some protection.

We bumped into Euan and Mike who had seen a Peregrine Falcon and Short Eared Owl on the other side of the island, so we thought we’d give it a go. Unfortunately we didn’t see either but I did get to photograph a Wheatear at close quarters so it was worth the soujourn. There were also a small colony of Grey Seals on a rocky outcrop, athough they were too far away to get any decent shots of. 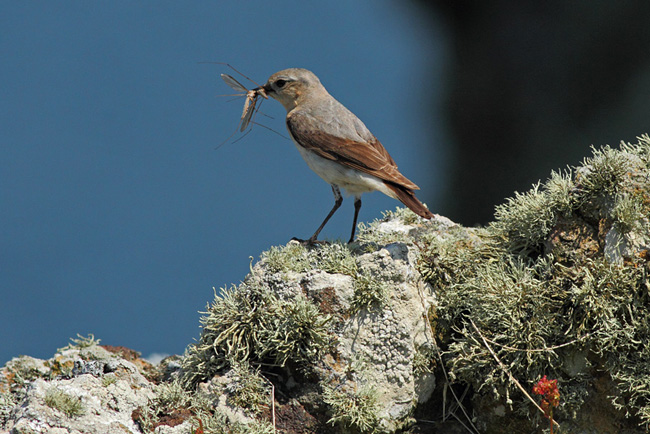 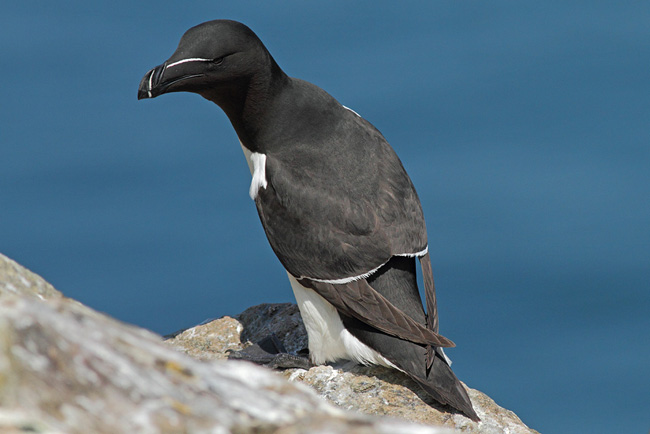 Razorbill near the pick up point. Handsome birds.

Worth mentioning is the amazing colour across the island. The bluebells  were out in full bloom, with carpets of bright pink campion fighting for attention. Absolutely stunning.

We made it back to the boat just in time, and after a cup of tea back at the campsite Euan and Mike made their way home. Colin and I stayed on the campsite for another night, dining out at the Lobster Pot in Marloes, and then attempting to get a good night’s sleep after an exhausting couple of days. The sleeping elephant put the kibosh on that of course. But feeling a little fresher than the night before we made the journey home, doing it in good time, and thankfully without hitting any traffic jams. 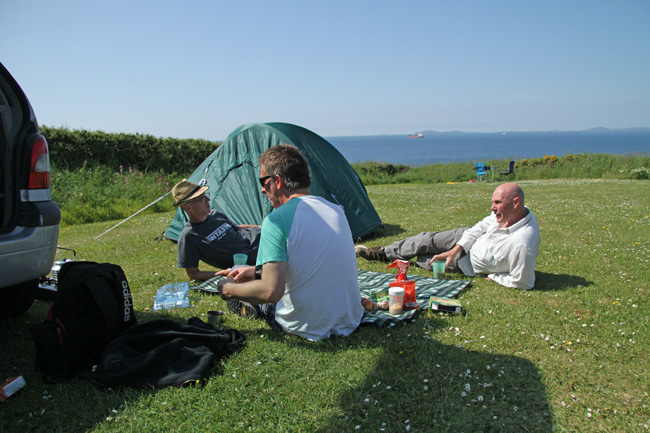 We’d really lucked out with the weather, two glorious days of sunshine. Whilst perfect for the kites I had hoped for slightly more overcast for the puffins to avoid burning out the highlights on their chests, but you can’t have everything!