or…how I fell fallow of the law(!) 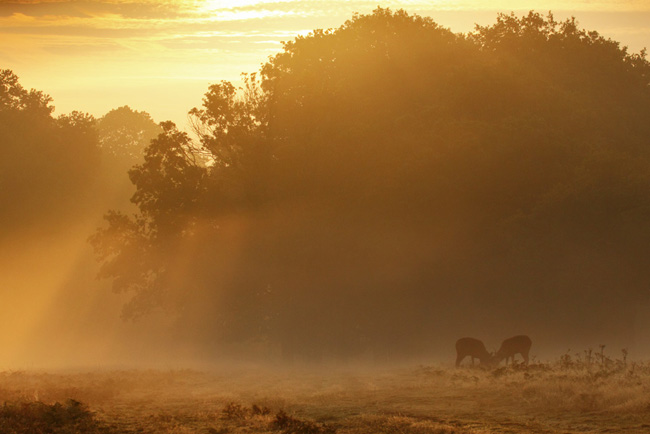 Stags in the Mist

Much as I enjoy bird photography I felt I was in danger of being pigeon-holed (sorry), so thought I would get myself along to Richmond Park to photograph some deer for a change. Although the rut isn’t supposed to peak until mid October I thought it would be a good idea to get some practice in and with the promise of good weather I thought it was too good an opportunity to miss. I set the alarm for 5 o’clock and headed up the M3. The mist rising from every field I passed was incredible. I got to the gates at 6.30, and as they weren’t letting cars in until 7 o’clock I decided to have a little wander round and capture the very first sunlight of the day, as the sky turned pink. 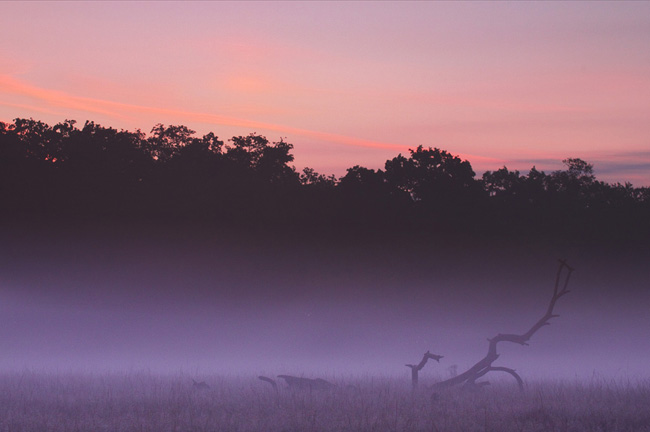 Old Branch in the Mist

Then I headed back to the car as soon as the gates were open and started the search for deer. It didn’t take long, within a minute or two I’d found two Red Deer rutting. 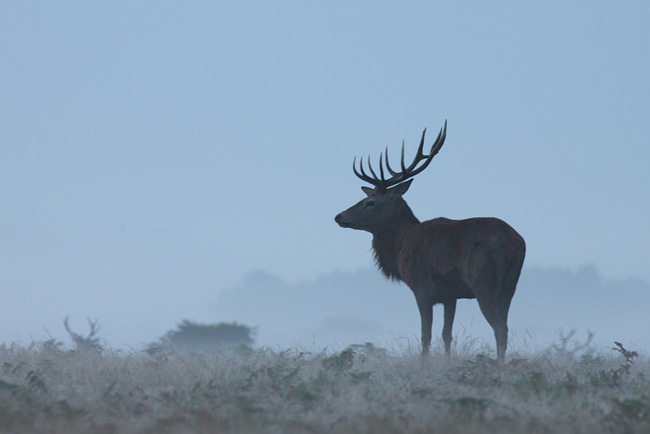 The Winner! I think that might be the sheepish loser retreating over to the left.

In my haste though, I’d parked the car at the side of the road and looked round to see the Met Police whacking a fine on my car. With the sun just peaking out from behind the trees I had to wrench myself away to go park the car somewhere sensible. Like a car park. I hot footed it back to the spot, feeling like I just couldn’t get there quick enough. It was like those dreams you have when you’re running on the spot and can barely move. There was about half hour of beautiful golden light. Think I successfully managed to miss most of it. I did however get this chap as he crossed my path, so every cloud and all that. 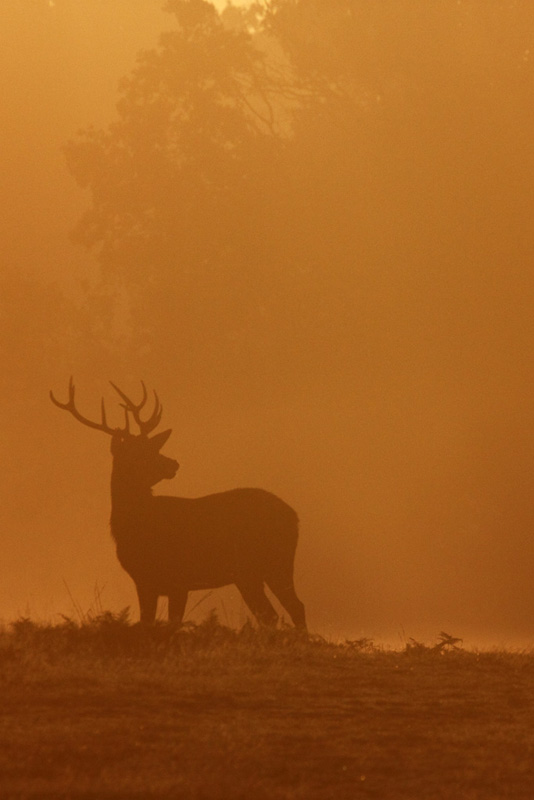 A Stag in the orange light of morning 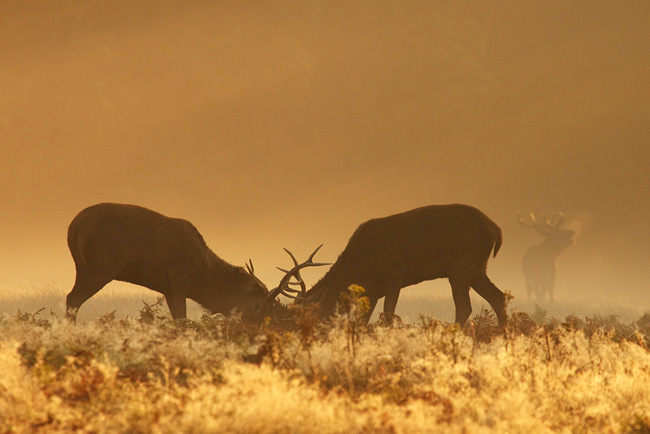 More rutting fun. The fella in the background was an added bonus.

As I crested the brow of the hill the light was pouring through the trees creating a wonderful atmosphere, and that’s when I got the shot at the top of the page. As the sun rose higher in the sky the mist soon burnt off, and as the clouds rolled in there was a far more subdued light. I went in search of other opportunities. A number of stags were all trying to out do each other with their calls. I found the guy below giving a good account of himself in the bracken. 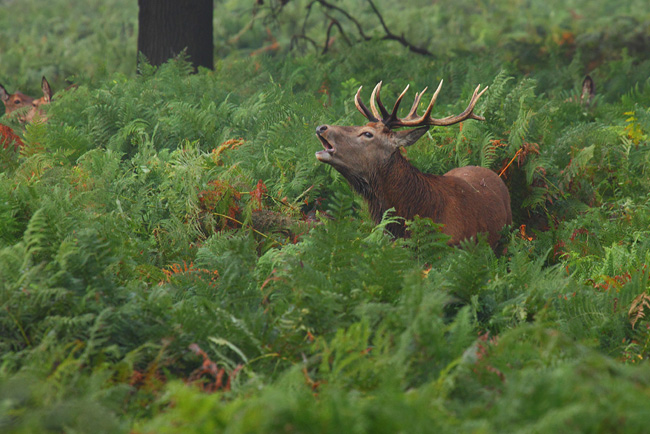 Stag in the Bracken

The loudest however, by some margin, was the fellow below. A very deep, booming voice, a bit like Brian Blessed. 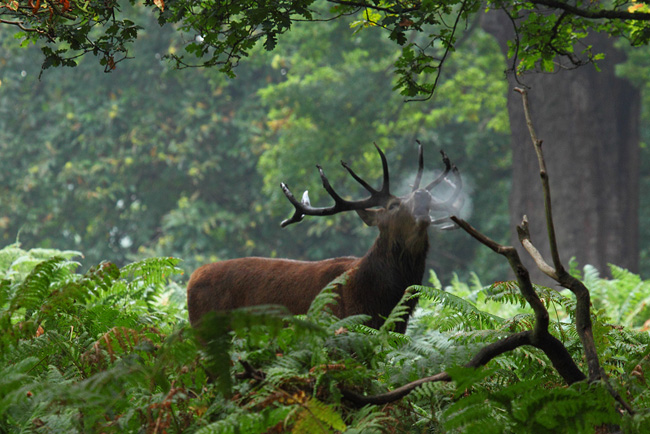 The King of the, er, Park

After this he then went in search of some adornment for his antlers. I’m sure that would’ve impressed the ladies no end.

With a full card and flat light I resolved to return again at the first sight of a clear day. Thankfully the following week saw the hottest October on record, and so I again made the journey up the M3. The weather was perfect, with a thick mist to begin with, so thick in fact that it was difficult to find where the bellowing was coming from, and then as the sun came up there were some beautiful conditions with light filtering through the trees. The mist eventually burnt off and we were treated to some beautiful early morning light. When I say ‘we’ I mean myself and the other 200 or so photographers in the park! There were a crazy number there, and at times keeping them out of shot was quite a challenge. 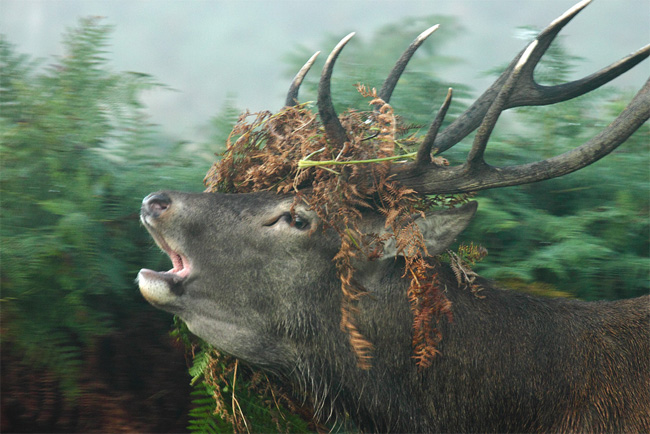 This guy passed right in front of me, a little too close for comfort.

The rut really was in full swing, quite a contrast with the week before when things were just warming up. The air was thick with the sound of stags bellowing all around you. The majority of the action was taking part in a clearing, with photographers lining the edge, all vying for position. 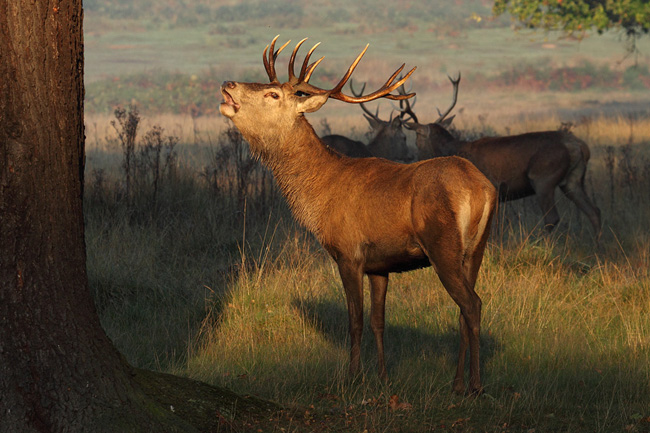 The nice warm light I'd been hoping for. Nice pose too.

I got a few in the bag and then moved on to try and find opportunities elsewhere. As I made my way back to the car, I had the Stag below blocking my path. He seemed to have quite a nark on, and so I stopped in my tracks and waited. And then set the camera up. Hell, if he was going to charge I was at least going to get a decent shot. Eventually he seemed to calm down, as did my heart rate, and I returned to the car happy. And without a parking ticket this time, which was nice! 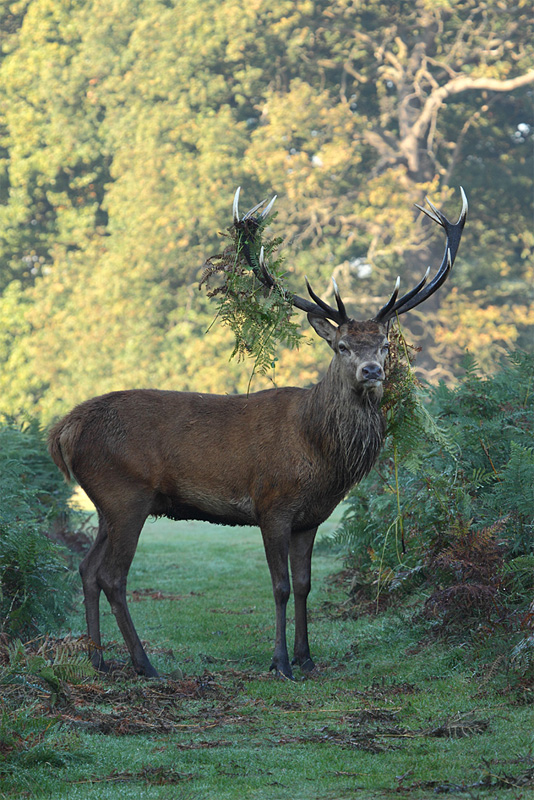 He's got a right nark on!