For me, there is nowhere more stunning than the Canadian Rockies. Much as I love New Zealand, there are maybe 3 or 4 beautiful glacial lakes to be had. In Canada there are maybe in the region of 30 odd! The sheer scale and majesty of the mountain range as you approach on the main road out from Calgary just takes your breath away. Its almost intimidating. Being America everything is on a much grander scale.

We were visiting Canada and Alaska on our honeymoon, so I almost felt guilty taking all my camera equipment with me (not really). The one mistake I made was booking the trip a little too early in the year (late May). If I’d done my research I’d have found out that the lakes I really wanted to shoot (Lake Louise and Moraine Lake) don’t actually thaw out until mid to late June. Its fair to say that I was absolutely gutted when I got to Lake Louise to find a layer of ice covering all but the very edges. Moraine Lake was actually shut off! Fortunately a couple of days later Lake Louise had thawed sufficiently to get some nice shots, and I think in retrospect I really like the inclusion of the snow and ice in shot. 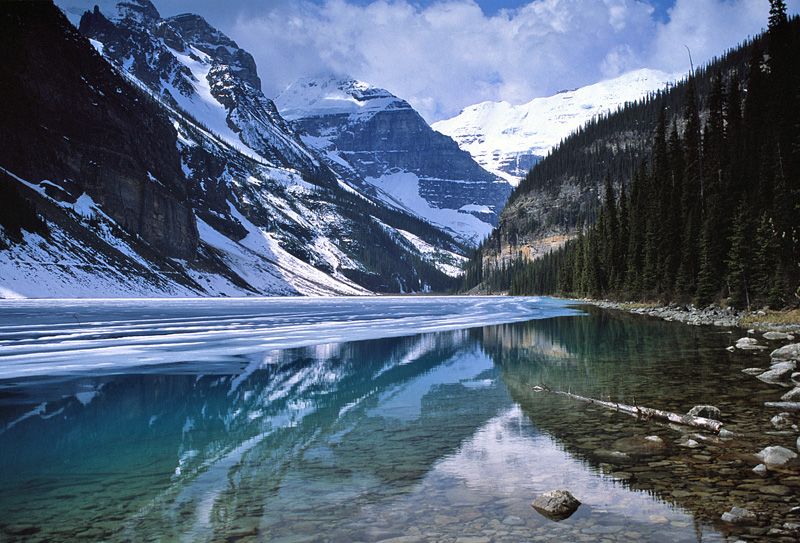 For me at least, it may be the best photograph I’ve ever taken. The location may be second only to Lake Pukaki in beauty. Its sits at the bottom of a natural amphitheatre, surrounded as it is by the mountains. When we arrived, before all the coach loads, it was just incredibly peaceful and serene, not to mention pretty cold! The colour showing through is just stunning.

Banff
Prior to travelling up to Lake Louise we spent the best part of a week in Banff. So many lakes here to photograph, so little time. We headed out one evening to the Vermillion Lakes to catch the sunset on Mount Rundle. Got quite lucky, with some nice pink in the sky and a nice still lake. 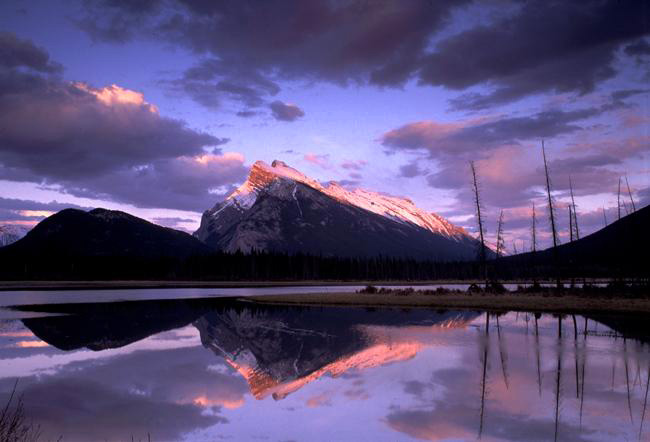 Jasper
From Banff and Lake Louise we headed up the Icefield Parkway to Jasper. Headed out one clear morning at 5.30 to catch the sunrise on Patricia Lake. I’d been reading ‘When Bears Attack’, probably not a sensible thing to do as it puts the fear of God into you. To quote Bill Bryson I read saucer eyed the numerous tales of people being ripped to shreds by stalking bears. As I set up my tripod I noticed a massive paw print on the sand. ‘Eeek, definitely bear territory’ I thought but carried on unperturbed. On the way back past Pyramid Lake which sits right next to Patricia Lake, I just had to stop and set up again as the view was amazing. The resulting photo, its fair to say, has been my most successful photo to date, featuring in Outdoor Magazine as Photo of the Month. 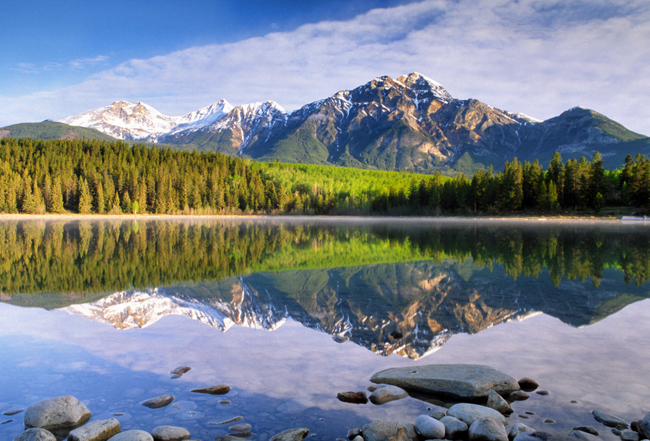 Vancouver Island
From Jasper we took the long drive all the way down to Vancouver, meeting up with a couple of friends of Clare’s before making our way over to the far more peaceful Vancouver Island. Booked a trip out on a zodiac to see the Orcas, which fortunately for us, had just migrated back that day from warmer climes. We were treated to a large pod revelling in being back home, with a couple of them breaching, and alot of excited feeding.

Alaska
From Vancouver we then boarded a massive cruise liner bound for Alaska, the perfect antidote to 2 weeks of driving. Spotted our first bald eagles at Ketchikan, which soon became a regular sight as we moved up the West Coast. Booked a whale watch trip at Wrangell to see the humpbacks, but have to say it wasn’t the best. The Humpbacks were very shy, and as soon as one appeared 3 boats would descend upon it, which just sent it diving back down again. No bubble feeding on this particular day!

Continuing on up to Skagway we travelled up the Tracy Arm Fjord to see the giant Sawyer Glacier, before rounding off the trip at Haines.

Davidson Glacier
Had another one of those unforgettable days when we went to see the Davidson Glacier. Boarded a catamaran from Skagway and made our way through some beautiful fjords, spotting a humpback blowing on the way. Then we canoed upstream in beautiful weather to a very still lake full of icebergs calved off the Davidson Glacier that sits at the far end of the lake. One of the more pristine Glaciers I’ve seen (and you see quite a few in Alaska). 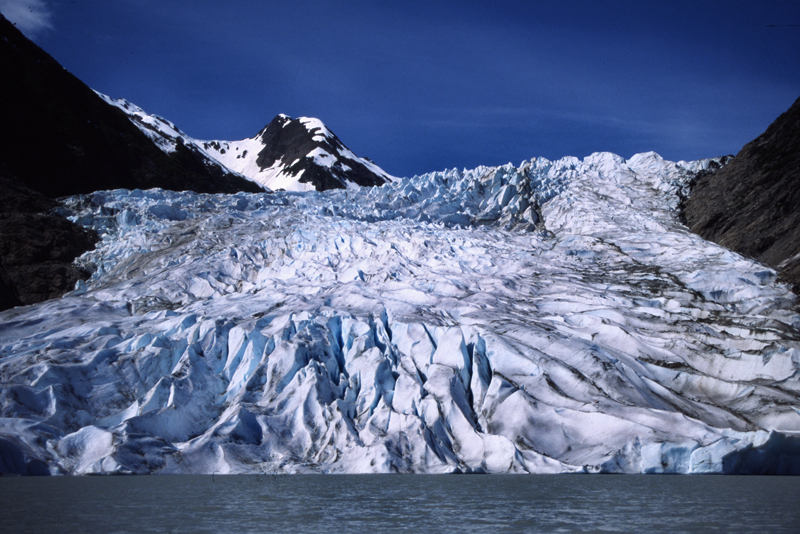 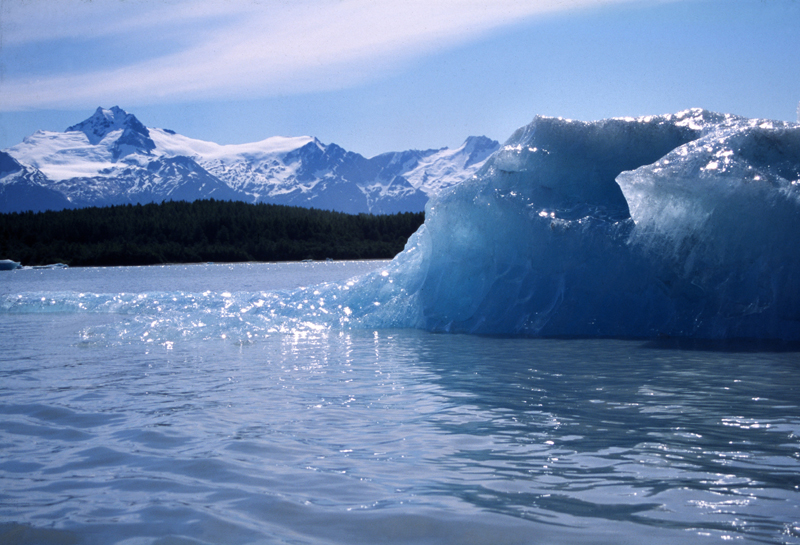 On the way back we visited a colony of seals, with a couple coming out to check out the boat. One of the guides suggested when we got back to Skagway to try a trail that leads out the back of the town and up to a beautiful lake somewhere in the forest. So we took her advice and began the walk. And then it happened. As we turned a corner a black bear was sat eating leaves to the right of the path. Panic immediately set in and we both legged it the hell out of there, and ran straight back to town!

From Skagway the liner headed back down to Vancouver, and after 3 and a half weeks it was time to come home, with the promise that I’ll return one day when the lakes are fully thawed!