Of all the trips I’ve been on, none has had a more profound effect on me than New Zealand. Although it was 8 years ago now, its had a lasting impression on my outlook and memory. Maybe its because, despite being over 30,  I experienced so many things for the first time. Such a huge diversity of landscape and nature, and a friendly people that make a real effort to look after it. It’s almost hard to believe looking back, but prior to NZ I’d never seen a dolphin or a seal in the wild, not to mention sperm whales and orcas. Photographically, I finally started producing the kind of images I’d long since tried and failed to achieve in the past. I think above all it gave me a far greater appreciation of the great outdoors and made me see what’s really important in life.

We arrived in Auckland on January 1st from our 3 day stop over in Hong Kong, and promptly headed straight for the hotel and our beds! Slept for the rest of the day and through the night and by the next morning we were cured of the jet lag!

Paihia
After breakfast we headed straight out and up to The Bay of Islands. Our first port of call was Tutukaka to book diving out at the The Poor Knights Islands. Had a fantastic sunny day full of firsts, first off were stingray in the bay, then we witnessed a feeding frenzy on the way out to the dive site. Must have been over a hundred dolphin, with a couple bow riding our boat, and many gannets divebombing! I was very nervous for my first post-qualified dive, but had a fantastic couple of dives with some beautiful fish and stingray. The only downside being the nose bleed I gave myself for coming up too fast! After a night in Tutukaka we then headed to Paihia for three nights. Unfortunately the weather turned and we had nothing but grey and wet skies. Went on a dolphin watching trip, but we only saw a couple bow riding the other boat.

Rotorua
Headed south down toward Rotorua, taking in Morokopa Falls and the glow worm caves on the way down. The bad weather stayed with us as we reached Rotorua which only seemed to make the foul stench of sulphur in the air all the worse! Have to say we found Rotorua rather disappointing, but as we headed out to the geothermal reserve at Waio-Tapu the weather at last began to improve and a got a few nice shots. The most photographed location here is the Champagne Pools, but there are also beautiful bright green lakes and interesting natural sculptures. 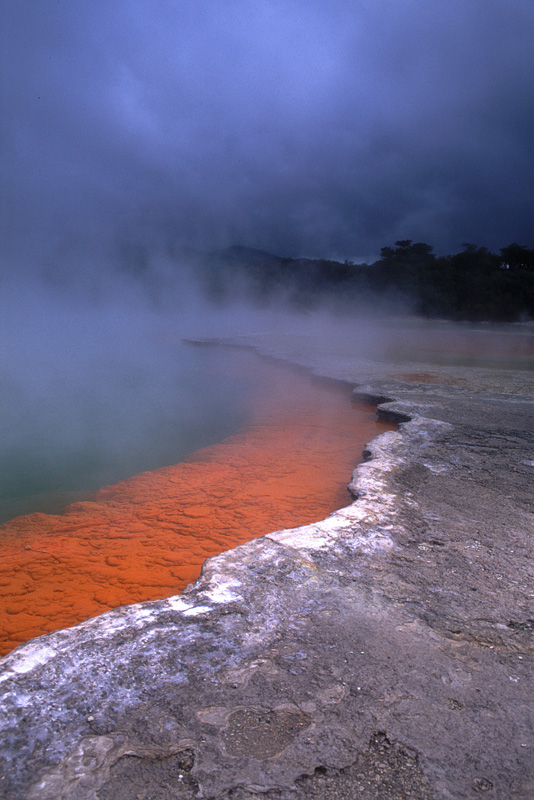 Napier
From Waio-Tapu we headed further south, past Lake Taupo and onto Napier where we met up with our good friends Kim and Grant, who were over visiting their family. We all had a fantastic day out at the gannet colony at Cape Kidnappers, which involved a quite precarious ride in a minibus up a very steep incline to get there. Once there you can get really close to the birds who don’t seem to mind your presence at all. 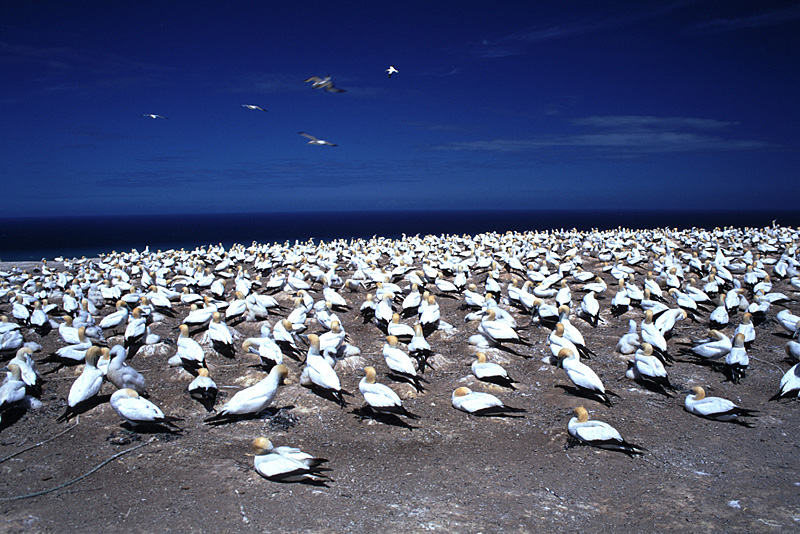 The next morning Grant then got us up at 5.30 to photograph the sun rising over Temata Peak. The sunrise lighting up the valley below made the early start very worthwhile. 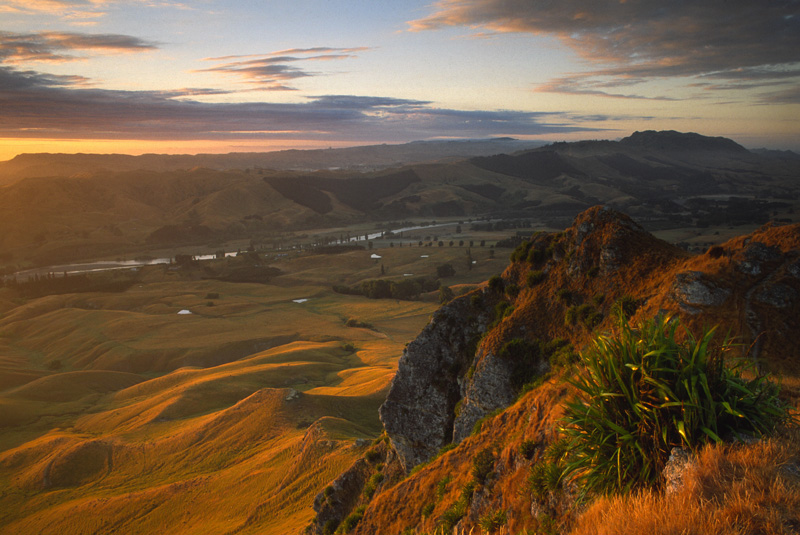 Kaikoura
From Napier we left Kim and Grant and headed down to Wellington to make the crossing over the South Island, and once over the Cook Straits we headed straight for Kaikoura. As you head in to Kaikoura there’s a seal colony on the coast (another first) so we stopped the car and got a few shots before heading into town and sorting accommodation. 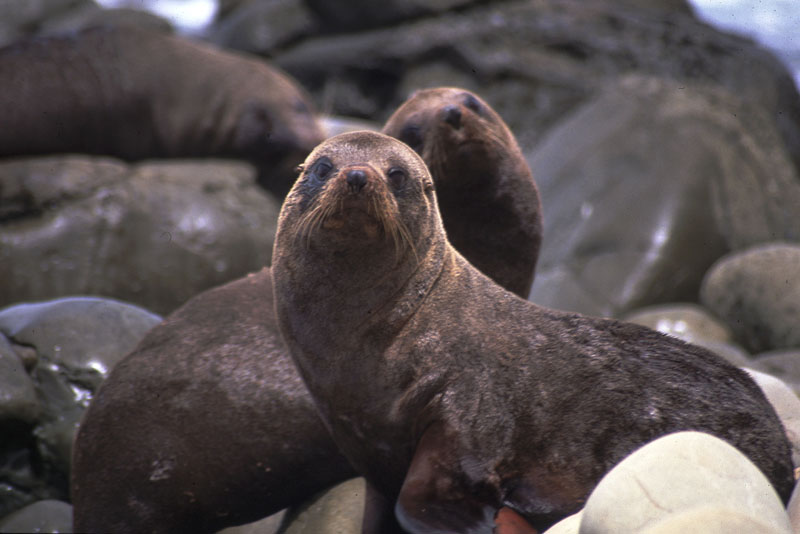 As a long time member of the WDCS it had been a long held dream to go whale watching, it was in fact one of my main motivations for going. I wasn’t to know it at the time, but it would prove to be the best whale watching I would ever experience (to date at least!). The weather was superb and we got 3 good sightings of Sperm Whale, who were very approachable, and getting classic fluke shots as they dived down was fairly easy. 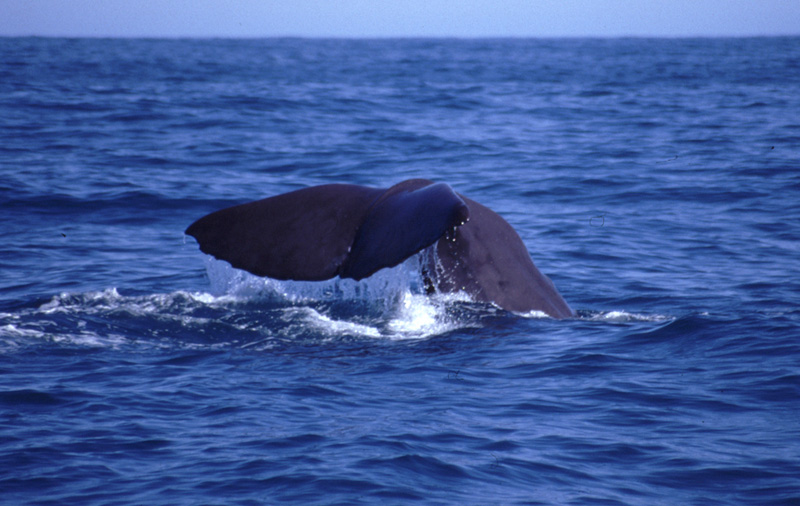 As we were about to head back we got word that 2 Killer Whales had come into the bay, so we then had a good spell riding alongside them. Truly awesome creatures, the male’s fin was massive, jutting 6 foot out the water. 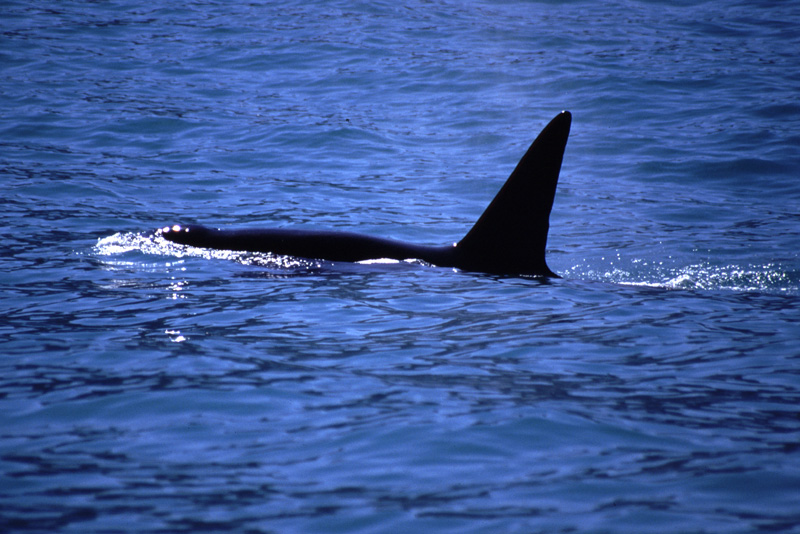 A day I will never forget, we were truly spoilt. Kaikoura has to be one of my favourite places on the planet, there’s a special atmosphere, from the massive whales painted on the side of the walls, through the numerous cafes and shops, to just sitting on the beach, the mountains behind you, the beautiful turquoise sea in front and dolphins leaping out of the surf.

Pancake Rocks
From Kaikoura we heading over to the west coast to capture the unique formations at Punakaiki near Greymouth, otherwise knwon as the Pancake Rocks. 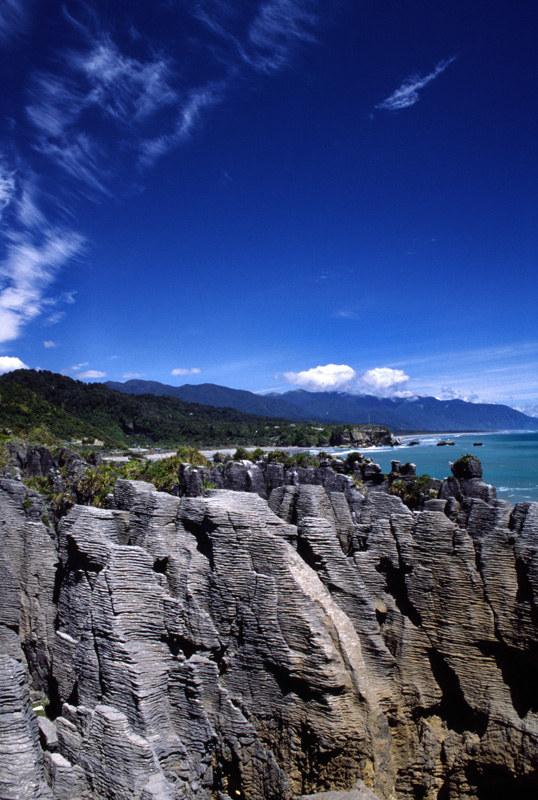 Pancake Rocks, Punakaiki
We then headed south through Arthurs Pass and toward the Southern Alps. We stopped for a night at Lake Tekapo and caught a nice sunset with a thick mist rolling down over the mountain. 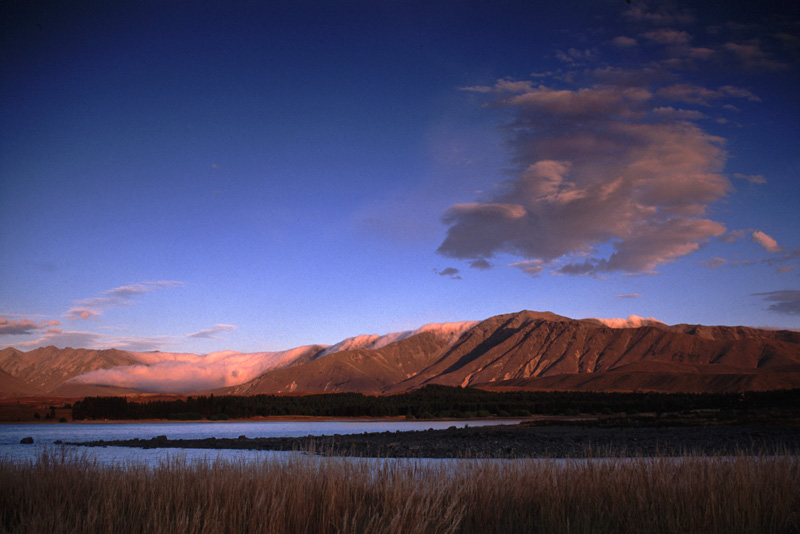 Lake Tekapo at Sunset, with a thick mist rolling down from the mountains

The next day we headed down to Lake Pukaki and the most beautiful sight I’ve ever seen. Before we could even see the lake we knew it was there as the amazing cyan blue of the lake was being reflected in the clouds above. As we crested the hill the sight that greets your eyes is just amazing. The colour blows you away. We went for a trek to see the Tasman Glacier, and by the time we got back down the clouds had cleared and the colour of Pukaki was even more stunning, with Mount Cook looking majestic in the background. 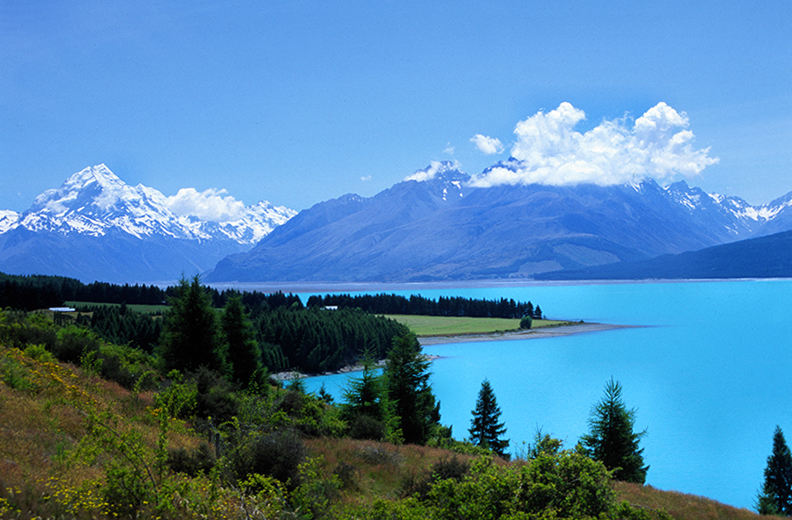 Lake Pukaki with Mount Cook behind

Fox Glacier
From Pukaki we then drove round the bottom of the Alps and up the West side to see the Fox Glacier. The weather was pretty poor for a couple of days but on the third day it cleared sufficiently for us to get a helicopter onto the glacier for an ice hike (another couple of firsts). 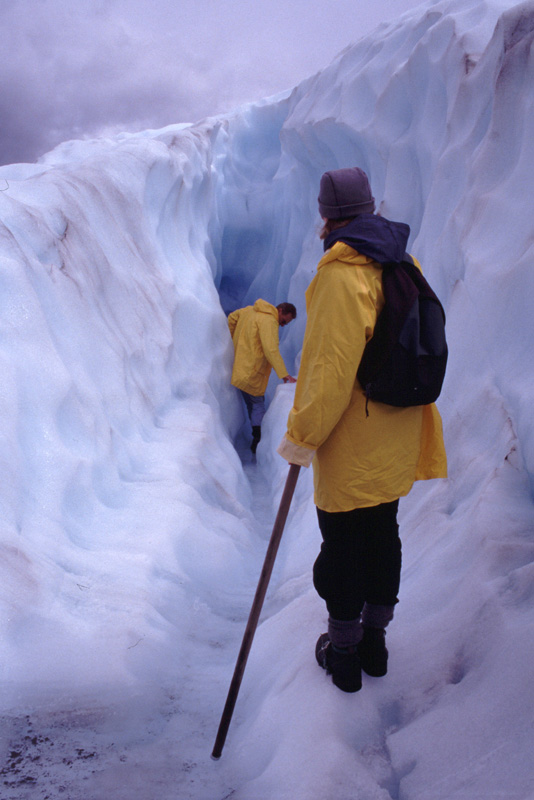 Clare with a rather fetching yellow mac on the Fox Glacier

Queenstown
We then made our way back round to Queenstown, another stunning and very relaxing town with some great shopping, amongst the backdrop of The Incredibles mountain range. From here we had a day trip out to Milford Sound, another awesome sight, especially as you exit the tunnel bored straight through the mountainside. The whole coach went ‘Wow!’. ‘We get that alot’ said the coach driver.

Moeraki Bolders
Next stop was Dunedin where we visited another seal colony, before heading up the East coast to see the Moeraki Bolders, perfectly spherical formations that literally appear to be coming out of the rock face. Apparently they only appear in one other place on the whole planet. Very strange. 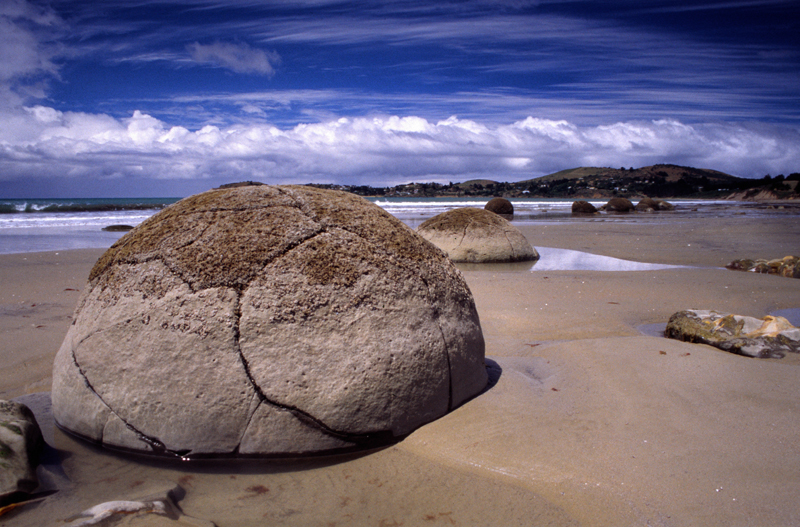 From here it was on to Oamaru to see the blue penguins coming back home from a days fishing. Very cute!

Kaikoura (part 2)
It had been our intention to spend the last 3 days in Christchurch, but we weren’t that impressed and so decided to travel the 200 odd kilometres back up to Kaikoura. We made the most of it by booking a dive with the seals, another unforgettable experience. The seals are very curious and playful and come right up to you before hanging upside down eyeballing you. I only wish I’d got some shots, but sometimes its better to simply enjoy the experience.

Homeward Bound
It was with real sadness that we headed back home, but it was an experience that will stay with me forever, I only hope that one day we can take the kids there and do it all again.